The Chilean apple industry has focused its exports mainly on commodity varieties such as Gala and Fuji. With all the changes in the global apple industry in the last ten years, Chilean producers wisely chose to improve the clones of these popular varieties. However, the new varieties (club) are a real option for the variety replacement that is happening today in Chile.

In the last years, the old and well know varieties have led the Chilean apple exports, but new varieties such as Ambrosia and Jazz have gained importance too. In addition, at the same time new variety clones such as Brookfield, Galaval, Jugala, Buckeye, Raku Raku, Rosy Glow, Lady in Red, among others, have been introduced to replace the old varieties Gala, Cripps Pink and Red Delicious.

This variety replacement can be observed in the figures from the Chilean Plant Nursery Association (AGV) yearbook. As shown in the next table, improved clones and new varieties such as Rosy Glow, Fubrax, Ambrosia, Rakuraku, Honeycrisp, and Galaval have progressively increased the number of plants sold. On the other hand, old varieties and clones have strongly decreased its sales.

As shown in the next table, the new apple variety exports have maintained an increase in the last five years with 13,651 tons shipped in 2018. However, that figure only accounts for 1.8% of the total Chilean apple exports of the same year.

The improved clones of the traditional varieties have little by little displaced their origin varieties and less productive clones. This can be clearly seen in the Fuji variety group, where the RakuRaku clone accounted for 57% of the group exports in 2018. The previous has also be seen in other groups such as Gala, where varieties such as Tenroy, Brookfield and Buckeye have shown an increase in the last years. 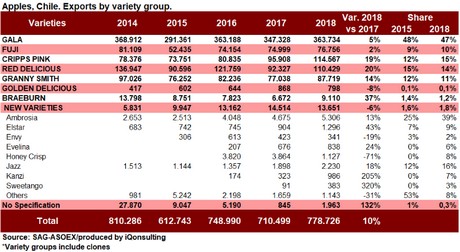 With a little bit more than 35.000 hectares, Chile represents 2% of the total World Apple production and 29% of the Southern Hemisphere. In addition, with a volume around 740,000 tons, Chile remains the fourth largest apple exporter in the world and the largest in the Southern Hemisphere. The apple variety renewal has allowed Chile to maintain its production levels and foresee a small increase in the coming years, with better quality fruit.

New varieties market
In the year 2018, the production in Europe was low, due to severe frosts that affected the orchards in the main producing countries. In the United States, the situation was similar, with minor frosts in the late development stages. This led to the Chilean apple exports reaching their highest figure in four years, with 10% more fruit than in 2017.

The new varieties and clones were not external to this and as shown in the next chart, the exports were focused mainly in the markets previously mentioned (Europe and the U.S.). Although previously North America was the destination market that received most of the new apple varieties from Chile, in 2018, Europe grabbed a major share of the market, reaching 42%, while North America had 39%. 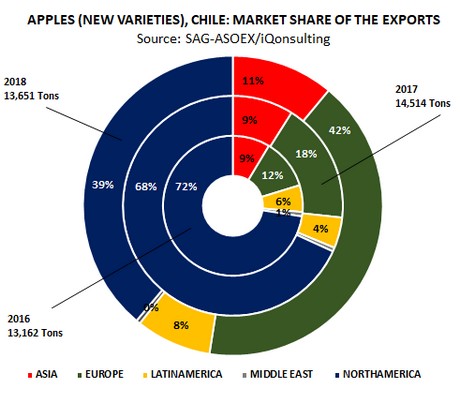 A progressive renewal of old varieties has to be developed towards new varieties and clones with better organoleptic quality and condition. In addition, a relocation to the best agri-climatic zones of the country of the production must be achieved. This will help the Chilean apple industry reach the export figures of five years ago (above 800,000 tons), and consolidate the Chilean apple export industry as one of the main players in the world.