Blueberries: “They’re becoming a commodity on a global level”

Supplies of blueberries continue to be strong, though the source of supply as well as varieties are starting to shift.

“We’re turning the corner from an abundance of supply to a tightening. This may be the case for the next six to eight weeks and it’s what happens in August,” says Stephen Paul of Homegrown Organic Farms in Porterville, Ca. “You get over the peak of the Pacific Northwest where some of the varieties that were heavily planted are now behind us and we move into the late-season varieties. If weather holds, we think we’ll go for the next six weeks up in that Oregon-Willamette Valley area.”

While the Pacific-Northwest is going on the West Coast, Michigan and the recently finished New Jersey are going on the East. “Michigan still has several weeks to go. They went through a heat wave that affected the quality somewhat and their volume. But all in all, they’re doing pretty good,” says Luciano Fiszman of Redondo Beach, Ca.-based Gourmet Trading Co. He notes in the West, supplies out of BC, Canada have had some weather challenges. “It’s been a wet and hot summer so the packing lines in the sheds have worked very slow to achieve decent quality in the boxes. The pack outs have not been ideal,” says Fiszman.

Peru begins
At the same time, Fiszman notes that Peru has begun its season of exporting blueberries early. “They’re also coming in with more volume. They had a mild winter and it wasn’t as cold. Peru has also increased its acreage and will continue to.”

He notes that most of that pressure will likely be seen on the back end of the domestic blueberry deal. “It’ll be interesting to see what that means for everybody,” says Fiszman.

“There are a ton of plantings overall on blueberries. We always look at them as specialty crop but the reality is they’re becoming more and more of a commodity on a global level,” says Paul. “You’re going to continue to see volumes increase and organic volumes increase on the global supply of it.” 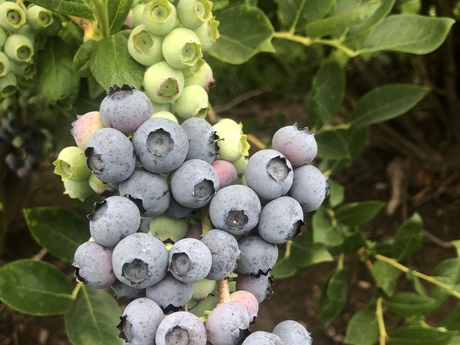 Developing industry
Paul adds that blueberries are also still in its infancy as a commodity. “It’s still young and we’re getting better on being able to address the continuity, the flavor and sizing profiles, to where we can ensure we’re giving customers a product to consistently enjoy. This will help grow the commodity,” he says.

All of that supply of course is to meet with the strong demand blueberries see. “But demand is a function of: are we pricing it right to stimulate more consumption? That’s the key,” adds Paul.
That leaves prices as average right now, though expected for this time of year. “The demand has picked up compared to years past. This same volume a few years ago, I’m not sure how they would have moved it,” says Fiszman. “The market isn’t feeling like: what are we going to do with all of this fruit?”

That said, looking ahead, Fiszman adds that he’s unsure how Peru’s early entrance into the market will affect pricing down the road, though he notes that the first of the Peruvian blueberries are great quality and Gourmet Trading is ready to transition into the off-shore crop.