Pacific Canadian Fruit Packers: “It’s a record year for sure”

This summer is bringing in what should be a record crop of blueberries.

The harvest is expected to return to the record levels of 2016, when 172 million pounds of the Fraser Valley’s most popular crop was harvested by B.C. growers – most of them based in the Lower Mainland.

“And it could be more than that,” said Anju Gill, with the Abbotsford-based B.C. Blueberry Council.

She bases her optimism on conversations with growers and said early indications are good. But predicting the crop is like trying to forecast the weather. 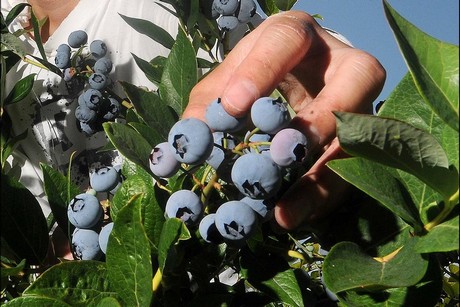 The great harvest of 2016 was followed by a drop to 135 million pounds the next year, as a summertime drought blighted the crops.
Last year bounced back with returns of 160 million pounds.

A wet July let to some softening of the fruit, said Gill, but recent sunshine is a great sign for the varieties now being picked, and will also benefit later varieties, which will start to be picked in the next 10 days.

Cam Watt, sales manager for Pacific Canadian Fruit Packers in Pitt Meadows said conditions have been perfect, from a mild winter, to a spring that saw good pollination by bees, and now a summer with the right mix of rain and sunshine.

“It’s a record year for sure,” predicts Watt. “For our industry, it has been perfect.”

As much as volumes have been high, the quality of fruit has also been good with the early varieties of Duke berries. The same has held true for the mid-season varieties like Liberty and Aurora, he said, which are just finishing. The blueberry harvest will finish up with Elliott the primary variety, and it is being picked now in some fields.

Canada is the world’s second-largest producer of high bush blueberries, and 96 per cent comes from some 800 growers in B.C.