At Asia Fruit 2019, Mr Apple will be showcasing new apples in their range … plus their new Mr Apple mascot. 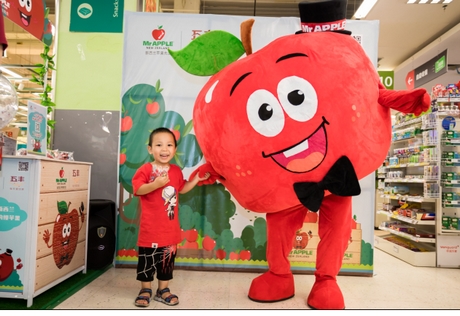 "Posy™ is one of our newest apples. Harvested and shipped right at the start of the season (Feb/March), Posy™ has wowed customers in China," said Mr Apple's Retail Sales Manager, Ben McLeod. "Posy™ has a beautiful, bright pink blush which makes it unique among early season apples. Its taste is also unique, because it is very sweet with hints of peach and rockmelon. In 2019, Posy™ was marketed exclusively through a few select partners and was 100% pre-packed … resulting in sales successes for Mr Apple customers."

Also new in 2019, early commercial volumes of Mr Apple’s new Dazzle™ apple hit the shelf. With new branding and a tagline that states, “Magic in every bite”, this is another apple finding success in Asia. Dazzle™’s beautiful, block red colour combined with a crunch-like texture reminiscent of watermelon makes it unique versus other red apples in the main part of the New Zealand export season.

"Mr Apple has also launched their new, ‘Mr Apple’ mascot in China in 2019 and at Asia Fruit, visitors can come and meet Mr Apple and get their photo taken with him on Wednesday and Thursday during the show. The launch of a Mr Apple character made sense for Mr Apple as it is the only apple brand in the world that is both a brand and a persona. The Mr Apple mascot has been making frequent appearances in China as part of Mr Apple’s marketing offer to their retail clients. Mr Apple has appeared at in-store demos, retail mini-shows and even office block activations in Shenzhen and Shanghai to drive brand awareness."

Looking ahead, Mr Apple is focusing its efforts on helping their retail partners sell more apples. 2019 was a banner year for helping customers get more strategic about their apple category and as a result, sell more apples for more money. Mr Apple actively supports customers with new varieties, customised size and variety programs and smart marketing.