Pakistan: Strategy in the works for boosting horticulture exports to $1bn

The Pakistan Horticulture Development and Export Company (PHDEC) is working on a comprehensive plan to enhance exports of fruits and vegetables to $1 billion mark within the next three years.
The five products identified by PHDEC include kinnow, mangoes, dates, onion and potatoes.

“We have almost finalised the marketing strategy for promoting exports of these products until 2021-22,” a senior officer of the Ministry of Commerce told Dawn.

In the year 2019-20, horticulture exports will be increased to $800 million from the current $700m, reflecting an increase of 14.28 per cent. PHDEC is a public sector organisation established by the Ministry of Commerce as Pakistan Horticulture Development Board in 2002, later converted into a Section-42 company in 2009. Due to several administrative and financial constraints, the company’s performance gradually deteriorated and there was serious consideration of its closure in 2015. 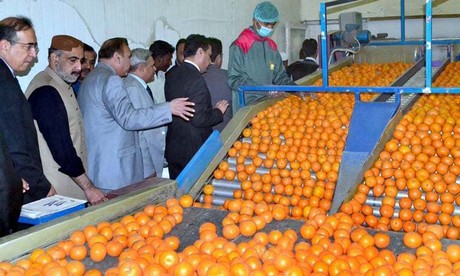 The official said the company will soon outsource studies on these five products to identify their potential in terms of promoting exports. Currently there is no marketing strategy for the export of horticulture products from the country. “We will finalise a marketing strategy in consultation with stakeholders in the next six months,” he said.

The strategy papers will cover export development of floriculture especially to Kenya and Ethiopia; export development of medicinal plants to China, import substitution in horticulture especially of garlic and lentils, market and product diversification of dates including a study tour to the United Arab Emirates (UAE) as well as mapping of Horticulture Zones along the China-Pakistan Economic Corridor (CPEC) and value-added industry in horticulture.

Currently, Pakistan imports $60m worth garlic from China. “We will also look for relocation of processing industries in the horticulture sector,” the official said.

Besides, the company will also sponsor reports on citrus, dates, mango, apple, potato, onion, floriculture and medicinal plants.
To resolve the financial issues of the PHDEC, the government has already allocated an endowment fund of Rs1bn. “Earlier, it [PHEDEC] used to be a dormant organisation due to mismanagement and political appointees. At one stage, it was decided to close down the company,” the official added.

On supply side, the horticulture sectors is facing issues related to narrow basket of products, inconsistent supplies particularly vegetables, lack of certification, extension services etc. “We are working on these issues to address it in shortest time,” the official said.

In trade promotion measures, the company will promote new high value markets especially UK and some European markets for citrus and mango.