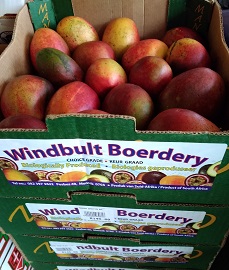 There is a mango grower sending fruit all through autumn and winter to the South African market, and that is Windbult Boerdery, growing biologically produced, high-density mangoes at high altitude on the Limpopo escarpment.

They follow an intensive biological programme with micro-organisms and biological control, and combinations thereof, that Danie Basson and his wife Jeanette, a microbiologist, have honed over seven years.

Danie Basson runs a farming enterprise in Munnik and Levubu closely following lucrative marketing windows, not only on mangoes, but also avocados (both very early fruit for the strong local market and late in the South African export season when volumes on the European market drop) and sweet potato grown during winter.

He’s a busy man: he also manages a black community’s farming business, the Maluma Farming Enterprise, having helped them out of the red to profitability through avocados, macadamias, litchis, bananas and sweet potato.

Hotels are major mango buyers in winter
“Many of our mangoes are bought by five-star hotels that offer fresh mango on their menus and who know that with our product there is no wastage, unlike with the mangoes imported from South America at the moment. We deliver to the municipal markets. Unfortunately logistically we’re not in a position to deliver directly to customers,” says Danie. “And this time of the year prices can be crazy – I’ve been told that the hotels pay up to R80 [4.7 euros] per kg just to be able to offer fresh mango on their menu. I also get a lot of calls from housewives who tell me that the mangoes are fantastic, but why are they so expensive?”

Danie, who has been farming mangoes since 1985, which was started by his late father, says that their climate – not too cold, not too hot – allows them to start in March with Heidi and continue into mid-September with Sensation, Kent and Keitt, long after other mango producers have finished. He doesn’t bother planting any early Tommy Atkins. If they had more water (the rainfall is low, maximum 450mm yearly), their volumes could’ve been more, but as it is water management is the single critical factor they have to manage through increasing soil carbon levels to improve water retention capacity.

“I will do everything in my ability to protect the crop, and we limit the use of chemicals to a minimum, but I like having a backdoor if the situation demands it. Harvesting mangoes in this window is all about manipulation, but we spray no hormones.”

On only 6ha of mangoes, with a thousand trees per hectare, the trees are kept small, which facilitates their intensive management practices, for instance removing the old flower stems when picking fruit. The stem produces ethylene, which inhibits development of the new flush. 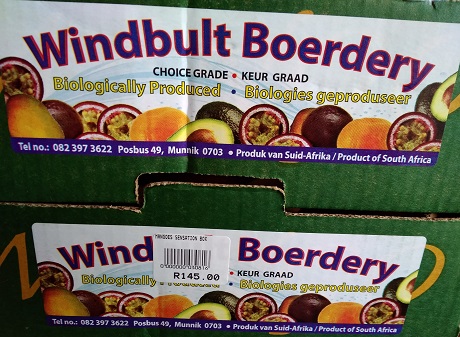 Avocados from February through to October
They also produce avocados, early Fuerte in beginning February solely for the domestic market, of which much go into ripe-and-ready programmes.

“Over the past four years the South African market for avocados, and for mangoes as well, has really improved, and why would I want to export when domestic prices are better than export prices? The early Hass export prices weren’t very good this season, but with Lamb Hass we aim for the last two weeks of September and the first two weeks of October when the European market is strong.”

Over two and a half weeks they’ll start harvesting sweet potato produced in Levubu, marketed locally under the name of Pasella Boerdery, when they have a two month window with their sweet potato grown through winter, exiting the market by December when other producers’ volumes pick up again.