The Centre has already created an onion buffer stock of 55,700 tonne in a bid to stabilise prices in case of scarcity during August-September period.

Commodities such as onions, primarily supplied from Nashik district of Maharashtra, recorded a uniform increase in price across the country because of disruptions in transportation last week.

Average wholesale prices of onions in the country’s wholesale market at Lasalgaon have gone up to Rs 1,600 per quintal owing to high demand from other states. 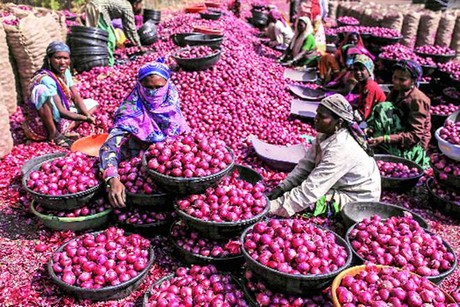 On Tuesday, modal onion prices were Rs 1,435 per quintal while arrivals were 23,064 quintals. Market committee officials said that arrivals have increased on high demand from other states which have been hit by heavy rains and monsoons.

The red onion coming from Karnataka has been damaged due to the floods and rains have affected crops in Madhya Pradesh and Rajasthan as well, officials said. Since onion from Maharashtra is of high quality, there is good demand for that, the official said. In Bengaluru, onion prices have jumped 17 % and 25 % to trade at Rs 13.50 a kg and Rs 25 a kg, respectively.

Moreover, there is a long weekend ahead with Independence Day celebrations on Thursday followed by a working day and holidays on Saturday and Sunday. Therefore, farmers have brought onions to the market in anticipation of the long weekend ahead and demand from other states as well, the official said.

Around a week ago, the modal prices of onions were Rs 1,200 per quintal. In neighbouring Pimpalgaon Baswant, modal onion prices were Rs 1,611 per quintal.

Last week, the supply of onions had dropped due to rainfall and farmers were also busy in kharif planting. Those farmers who required funds for kharif sowing sold their stored onions last month and sought a minimum support price of Rs 2000 per quintal.

Commodities such as onion, primarily supplied from Nashik district of Maharashtra, recorded a uniform increase in price across the country because of disruptions in transportation last week.