The northern mountainous province of Sơn La exported 60 tonnes of its longan to China and other countries on Saturday.

The shipment was announced at the opening ceremony of the Song Ma Longan Festival here the same day.

In his speech at the event, vice chairman of the provincial People’s Committee Nguyen Quoc Khanh said that the festival was held to promote Son La longan which can meet standards and requirements of choosy markets such as Japan, South Korea, the US and the EU. 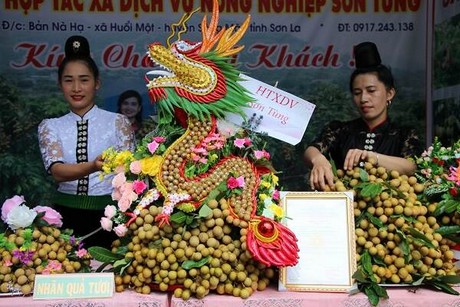 Via the event, the provincial longan and other fruits as well as farm produce will have a chance to penetrate many outlets worldwide, Khanh said.

The total area of longan cultivation in the province increased to more than 15,000ha this year, with output expected at 73,000 tonnes, of which 33,410 tonnes are eligible for export.

Son La expects to ship more than 8,100 tonnes of longan to China, the US, Australia, the EU, the Middle East, and other ASEAN countries by the end of this year.

Song Ma District has the largest longan area in Son La, with over 6,700ha and an estimated output of nearly 30,000 tonnes. The district hopes to export over 5,000 tonnes of longan to China, and 20 tonnes to Australia and the US by the year-end.