Hamburger Hafen und Logistik AG (HHLA) continued its successful business development and closed the first half of 2019 with rising revenues and results. It was again possible to improve profitability in a challenging market environment. Container throughput increased moderately, due in particular to the successful integration of the Estonian terminal operator HHLA TK Estonia, which was acquired last year. A significant rise in container transport was achieved. In conjunction with a strong increase in revenue in the Logistics segment and a once again moderate increase in revenue from property management, this led to total revenue of € 693.7 million (+ 9.6 %). The operating result (EBIT) improved strongly by € 14.4 million, or 14.4 %, to € 114.3 million. Effects from the initial application of the IFRS 16 standard accounted for € 7.1 million of the EBIT increase.

Angela Titzrath, Chairwoman of HHLA’s Executive Board: “The results achieved in the first half of the year confirm our expectations of reaching the targets forecast for 2019. However, these results only represent one step in our strategic plan to secure the success of HHLA in the mid- and long-term future. It goes without saying that, in addition to the continued development of our core business and tapping into further business fields, sustainability and climate protection are integral elements of our business model. We are aware of our responsibility – not only for HHLA’s economic development but also towards society – and have already done a lot of work in this area.”

Port Logistics subgroup: performance January to June 2019
The listed Port Logistics subgroup saw a 9.8 % increase in revenue in the first six months to € 677.5 million, while the operating result (EBIT) rose strongly by 15.6 % to € 105.6 million. The EBIT margin improved by 0.8 percentage points to 15.6 %.

In the Container segment, container throughput increased moderately by 3.8 % in the first half of 2019 to 3,770 thousand standard containers (TEU). This was particularly influenced by the successful integration of the terminal in Tallinn, which was acquired last year. Due to the increase in volume of 3.8 % combined with an improvement in average revenue compared to 2018, revenue increased by 5.6 % to € 401.7 million. This was largely caused by an increase in the rail share. The operating result (EBIT) increased by € 3.6 million or 5.3 % year-on-year to € 71.8 million. Of this increase, € 5.2 million is attributable to the application of IFRS 16. The EBIT margin remained unchanged at 17.9 %. 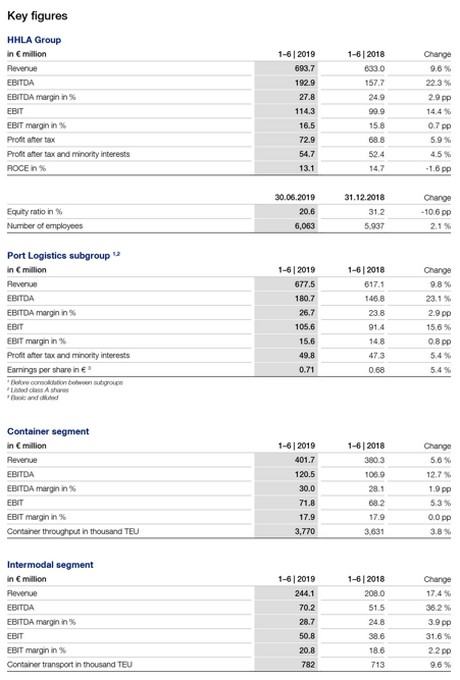 In the first half of 2019, HHLA’s transport companies achieved significant growth in the Intermodal segment. With an increase of 9.6 %, container transport rose to 782 thousand standard containers (TEU). This trend was driven by growth in both rail and road transport. Compared with the previous year, rail transport increased by 9.3 % to 610 thousand TEU. In a market environment that remains difficult, road transport grew by 10.8 % to 172 thousand TEU due to the strong increase in delivery volumes. At € 244.1 million, revenue was up 17.4 % on the prior-year figure and thus performed much better than transport volume. With a roughly sustained rail share compared to the previous year, longer transport distances, in addition to price adjustments, made a particular contribution to this strong increase in revenue.

As a result of the positive trends in volume and revenue, the operating result (EBIT) increased by 31.6 % to € 50.8 million. Lower route prices in Germany led to the further increase in capacity utilisation of train systems. The application of IFRS 16 did not have a major influence on the positive EBIT trend.

Port Logistics subgroup: outlook
Due to the takeover of North America services and the first full-year consolidation of throughput volumes of the HHLA TK Estonia container terminal, HHLA expects a slight overall increase in container throughput in 2019. Slight year-on-year growth is also expected for container transport. At a Group level, this should lead to a slight increase in revenue.

The operating result (EBIT) of the Port Logistics subgroup is expected to rise significantly year-on-year in 2019, largely due to the changes in lease accounting policy (IFRS 16) as of 2019. Earnings for the subgroup will be shaped largely by the Container and Intermodal segments. Stable EBIT development on a par with the previous year is expected for the Container segment, while significant growth is expected for the Intermodal segment.