Since mid-June, local organic potatoes from Bavarian fields have been available to retailers, but larger quantities have only been offered since the beginning of the month. "The starting position could be a bit better, but we cannot complain. The demand is still somewhat subdued, but this is normal, because the actual main crop only comes on in early September," says Nicolai Timaeus, purchasing manager of marketing company Bio-Bauern, based in Pöttmes.

The prices are currently in motion and are gradually developing parallel to the expanded offer. Timaeus: "The current price is still higher than in the two previous years, similar to the conventional range." 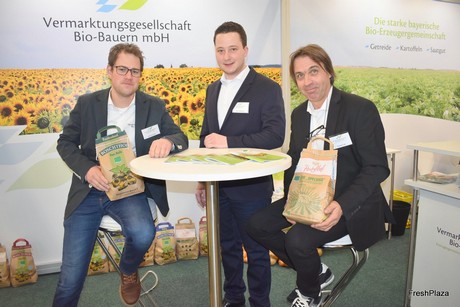 The exhibition team of the marketing company at this year's Biofach in Nuremberg.

Good standing in the trade
In the previous year, the Bavarian organic potatoes sector enjoyed a relatively high yield, in contrast to the conventional sector. however, due to heat-related loss of quality, there was an early end to the season. The development of heat-tolerant varieties has been a high priority, Timaeus observes. "The industrial potato Hermes is rapidly gaining in importance. The organic Belinda also does well in periods of prolonged drought."

In addition to this, the circle of suppliers of the marketing company is growing steadily, confirms Timaeus. "Individual farmers withdraw from potato production, adding new suppliers by switching to organic farming. We currently have around 100 potato suppliers within our area. However, the number is still growing." This is probably also due to the good standing of Bavarian potatoes within domestic food retailing. "Sales of organic potatoes are increasing, contrary to the conventional market share. Partly because of this harsh market, some people turn to organic potatoes." In the course of this, the German organic potato cultivation area, after years of stagnation at 8,000 ha, has now grown by a few hundred hectares. 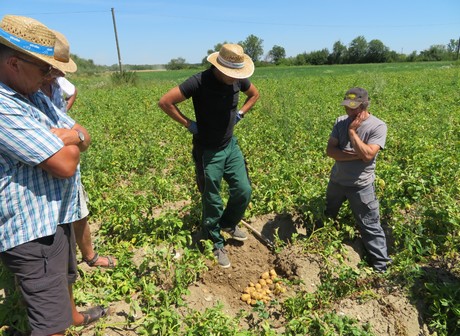 Growth opportunities in out-of-the-home catering
In terms of cultivation and marketing, the starting position of the Bavarian organic potato sector looks quite good. "Especially as regional potatoes are also sold at organic wholesalers and organic supermarket chains. This specialized trade is supplied by regional organic packaging companies with which we cooperate." However, the technical expert does not see table potatoes as having the greatest potential, but rather those aimed at the processing industry. "Consumption for private households will stagnate - even in the organic sector. I see more opportunities in out-of-the-home catering, where more and more organic products are desired. We are in a crucial position to change the markets. So I see a huge potential in processed potato products and in the frozen food sector."