The trade war between the United States and India has not yet reached its end, with the Modi government having raised import duty on American apples from 50 to 70 percent. The benefits have been immediate as American apples make up about 30 to 35 percent of the total imports.

“I just had a word with a Delhi-based importer of American apples. He has already taken a decision to cut down on imports from America by 20 percent, to begin with,” says Prakash Thakur, the former director of the Agricultural and Processed Food Products Export Development Authority (APEDA), a body under the commerce ministry.

This doesn't mean the Himachali apples have a monopoly on the market, as they will still have to compete with apples from other countries:

“Duty on apples from other countries such as Chile, Turkey and Poland among others will remain at 50 percent,” he said. “Yet, fewer apples brought from the US will give space to our fruit.” 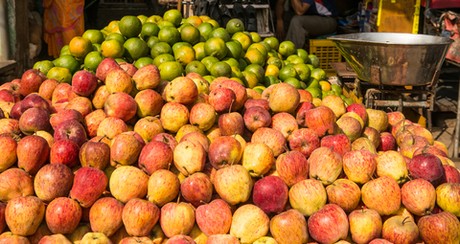 Thakur, a leading orchardist himself, however, wants the import duty on American apples to be imposed permanently and extended to produce from other countries as well.

Raising import duty on the apples had been an election issue in the recently-concluded Lok Sabha polls.

“It was the UPA government that was dilly-dallying on the issue,” says Narinder Bragta, the MLA from Jubbal-Kotkhai and BJP’s chief whip in the state assembly.

“During my term as horticulture minister, I had personally taken up the matter with then UPA minister for commerce, Anand Sharma, who hails from Shimla. He wrote back that under the World Trade Organisation rules, duty can’t be raised. Now Modiji has done it.”