Hundreds of people have joined a mass sit-in at Hong Kong International Airport on Friday, in a fresh round of anti-government protests designed to secure international backing for the movement. Organisers expected thousands to show up, and hoped police would respect what they said would be a peaceful protest that was initially billed to last until Sunday. 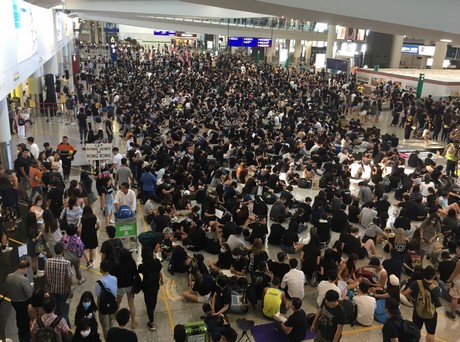 Since the protest started at 1pm in the airport’s arrival hall, protesters have been distributing leaflets to travellers explaining the main demands of the movement, which erupted from opposition to the now-abandoned extradition bill.

In recent days, mainland Chinese officials have issued stern warnings to protesters about the risks of continuing their broad campaign for political reforms. And while the movement began in opposition to a bill that would have allowed extraditions to the mainland — where the courts are controlled by the ruling Communist Party — but has since expanded to include a range of other demands for greater democracy.

The five demands include a full withdrawal of the draft legislation, implementation of universal suffrage and a retraction of the riot label attached to recent anti-bill protests. 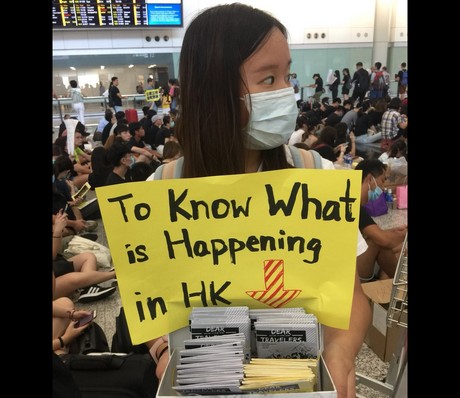 “We don’t really have an estimate but we expect thousands to turn up,” said the organiser of the sit-in, who gave his surname as Lee. “We have coordinated with the airport staff and this will be a peaceful rally, so we hope the police can respect that.”

Kitty Cheung, handing out leaflets to visitors as she took part in the demonstration, said: “I think the international awareness is high already but still the government doesn’t want to listen to our voice or opinion. We will keep telling the government what we want.”

Police said they had not received any applications for permission to hold the rally, and urged protesters to stay peaceful if they went ahead with what would be an illegal gathering.

In recent weeks, the protests have often ended with the Hong Kong police firing tear gas and rubber bullets in clashes with protesters. A hard-core contingent of young protesters has increasingly embraced violent street tactics, arguing that the government has ignored more peaceful displays. They stormed and vandalized the local legislature on July 1, the anniversary of Hong Kong’s return to China, and have since attacked several police stations and set fires outside them.