Colombia: Avocado exports on the rise

According to an article on iqonsulting.com, the accumulated exported volumes up to July 21st are 50% greater than the same period of 2018.

As mentioned before in this site, the Colombian avocado exports are showing a sustained growth. In only five years moved from 1,700 to 30,000 tons exported in 2018. In the current year, the situation has not changed and the accumulated shipments between January 1st and July 21st (week 29) add up to 27,000 tons, 50% more than the accumulated in the same period of last year.

Although until 2018 the Colombian avocado supply was focused in the European Continent which received 99% of the total supply in the years 2016 and 2017, and 97% in 2018, during 2019 more destinations have received fruit from this South American country, which has allowed to diversify the consumption of Colombian avocados. Despite the fact that in the present year 92% of the supply has been shipped to Europe, new markets have been unlocked and growth in countries that already had exported Colombian avocados has been observed. 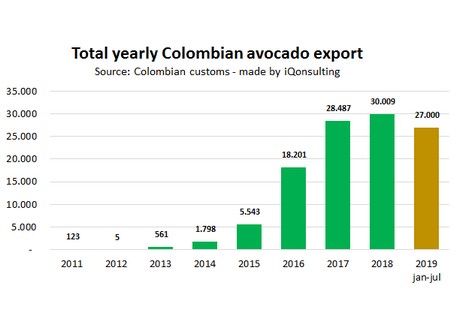 Between the new destinations, the most remarkable is Chile with 145 tons in 2019, while in the countries that already have imported avocados from Colombia and present a larger import in 2019 are the United States with 910 tons, more than three times the total quantity shipped in 2018. In addition, Saudi Arabia has imported 408 tons, almost ten times the quantity imported in the previous year.