With regard to plums, German supply was preeminent this week: there was an excellent stock of Katinkas, Hermans and Cacaks Schöne.  Serbian Cacaks Schönes played an important role, but were absent in Frankfurt and Cologne. Shipments from Spain and Italy supplemented the markets, which were rounded of by fruits from several Eastern European countries. The availability was obviously expansive. 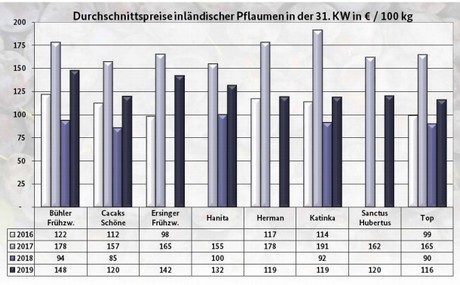 The quality was convincing in most cases; the coloration of the fruit was appealing as well. Nevertheless, demand did not always keep up with supply. Forming of stocks was unavoidable in some places. The  condition of these goods dropped off quickly, forcing traders to lower their prices to get rid of those batches. In Berlin, local mirabelle plums appeared at 4.50 € per kg and French Reineclaudes at 2.35 € per kg.

Apples
New Zealand, Chile and Argentina met the need for overseas imports. Their presence decreased. Often, these supplies were at center stage,so they received more than enough attention.

Pears
The fruits from South Africa and Chile lost in importance. However, there was a quiet and friendly demand, because their European competitors did not always meet with approval. Prices mostly remained at their previous levels.

Table grapes
An Italian inflow determined the events. Turkish Sultanas were not of a consistent, high quality. Seedless products were generally in focus, seeded grapes in some places had to be sold at discounts.

Strawberries
The fact that the end of the season is near was very palpable, as apparently both supply and demand were limited. The presence of domestic quantities dropped off.

Apricots
The supply was reduced. Sales were still rather tricky, because the shelf life of some batches was noticeably affected. Prices tended to go up for the most part.

Cherries
The presence of the local batches seems to have been limited; the season turned into its home straight. The limited sales stabilized or increased prices here and there.

Peaches and nectarines
Spain dominated events here, more so than Italy or Greece. The trade was rather sluggish. Here and there it only picked up in the weekend.

Lemons
Spain was ahead of South Africa and Argentina. Sales were quiet. Prices developed differently, depending on the locale.

Bananas
As usual, sales were affected by the high temperatures. It was the summer fruits that clearly got more attention of the customers. In addition to all this, the holidays slowed down the sale, which therefore obviously went just over quietly.

Cauliflower
Germany goods were center-stage, Belgian goods only appeared locally. Supply was limited, but was sufficient to meet the demand.

Lettuce
In the case of lettuce, German determined the events, more so than Belgian offers. Prices of the domestic batches remained mostly at their previous levels, those of Belgian article varied, as a result of different calibers and weights.

Cucumbers
The presence of snake cucumbers was apparently limited. Price increases were omnipresent. Demand tapered off noticeably, affecting the trade.

Tomatoes
The Netherlands and Belgium formed the foundation of the offerings. Importantly, Germany and Italy joined in as well.

Sweet peppers
The prices of the important Dutch red, yellow and orange batches shot up. Prices of up to €20 per 5 kg were seen. The customers acknowledged this development with a noticeably reduced demand.