Carotenoids and folate are two mandatory supplying micronutrients for children or pregnant women. Inadequate intake of these two nutrients is relevant to a higher mortality of both children and pregnancies. World Health Organization (WHO) estimates that there are still about 250 million preschool children suffering from Vitamin A Deficiency (VAD), particularly in Africa and South-East Asia. Approximately, 250,000 to 500,000 vitamin A deficient children loose their sights every year and half of them die within 12 months. As a great resource of carotenoids especially the provitamin A compound β-carotene with lower prices, sweet potatoes are important vitamin A supplements for those developing countries whose diets lacked an animal food supplement.

Scientist at South China University of Technology (Guangzhou) and at Southwest University (Chongqing) have selected six varieties of sweet potatoes roots (SPRs), including pale, yellow, and orange colors, to investigate the thermal impact (100°C for 60 minutes) on profiles of carotenoids and folate content in order to provide further information for nutritional changes of SPRs in the food processing industry. 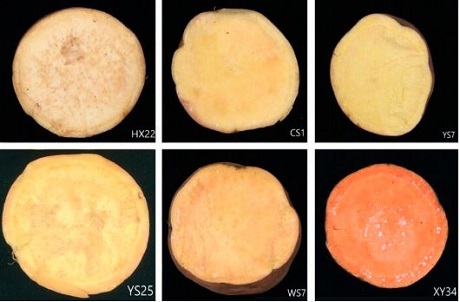 "An obvious decline was observed in total carotenoids after heating. Nevertheless, the content of provitamin compound β-carotene exhibited incredible stability during steaming and α-carotene multiplied in certain varieties (XY34 and YS25), evidencing that SPRs could be an efficient way for addressing Vitamin A deficiency (VAD) - the scientists explain - As for the total folate contents, two varieties (YS7 and CS1) showed no significant loss after thermal process while the others showed a significant decrease. The results indicated that steaming process led to generally loss of both carotenoids and folate, while the α-carotene and β-carotene were well preserved. These information might help to improve the food quality in processing industry and to understand the nutrition changes during steaming".