Regarding strawberries and woody berries, Jurgen de Braekleer, Product Manager Soft Fruit for REO Veiling, has noticed that prices fluctuate a lot. He mentions that this can happen quite quickly when days have a bit more or a bit less production. “We could actually say that the more extreme the weather for summer fruit, the better it is for our growers.” This year, the weather in spring was fairly temperate, resulting in a mediocre to weak start of the season regarding prices, according to Jurgen.

Regulating
He’s convinced the shortages and surpluses in supply that are increasingly caused by weather extremes can be better regulated by auctions clocks than via agreements with trade or retail. “Where do you go when there are shortages in products? To an auction where the supply for the entire region can be found grouped. When there’s a shortage, prices are highest at auction.” In times of surpluses, the clock also proves its usefulness. “Every day, the auction takes surpluses from the market. That hurts, it’s true, but a day or week later, demand and supply are balanced again, and the market has completely changed. By taking surpluses from the market, we ensure constant availability of fresh, qualitative product. This way, old product isn’t dragged along.”

Because the yields of daily fresh products such as strawberries and berries are expected to vary increasingly more often, it’s also becoming more and more difficult to work with permanent agreements in trade. “What are you going to do with surpluses and shortages? In the long run, you can’t go wrong with auction clocks.” Jurgen says it’s only interesting to enter into price agreements when the trader buys the entire production of a grower. He mentions that if the costs of buying additional product when there are shortages and if the yields of volumes left-over are calculated into the average price, growers earn less than was agreed.

“Growers have to realise that if they want to make money when the weather becomes ever more extreme in the next ten years, they’ll have to market their products via cooperatives and their various sales systems.” Jurgen calls on the growers to form groups. “In the long term, it’s best if growers supply to European retail together.” That way, producers can keep their options open when retail starts demanding more and pressure is put on prices, according to Jurgen. 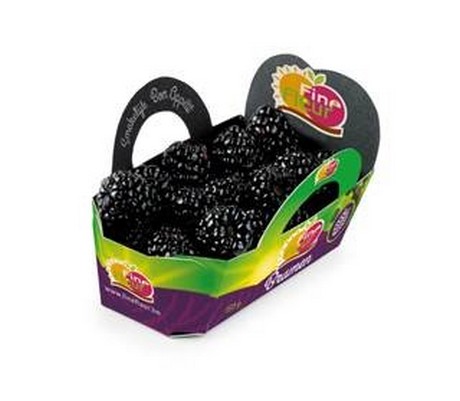 Fine Fleur
Jurgen has on the one hand noticed that supermarkets are headed towards larger packaging when it comes to summer fruit, such as 600 grammes of blueberries instead of the usual 300 grammes, to sell more volume. On the other hand, specialist shops are choosing smaller packaging of, for example, 100 grammes of raspberries to serve the smaller households. Flexibility is also increasingly more important. “Growers can fill all possible packaging.” Jurgen warns that it’s important to consider everything when making a decision between flexibility and efficiency, mostly because labour costs – particularly in woody berries – can rise to such an extent that growers can no longer carry these costs.

Quality is another price instrument. “The bar of quality and variety choice is put higher every year,” Jurgen says. This requires investments from growers, although it also means some traders would definitely pay more for great quality, such as the strawberries and berries REO sells under their Fine Fleur brand. This is the label that presents distinctive product characteristics such as a specific variety or original packaging. “People really pay more for this brand. The Fine Fleur brand is doing better every year.” About 15 percent of REO’s summer fruit is sold under the Fine Fleur brand.

Cherry concept
During the cherry season, which lasts six to seven weeks until late July or early August, the BFV (Belgische Fruitveiling) can guarantee the supply of quality cherries for six weeks. Diether Everaerts of BFV explains that they made a conscious decision to work with a fairly limited number of varieties to achieve a more homogenous supply: Samba, Korvik, Kodia, Regina, Lapins and Sweetheart. In the long run, they’re striving to have most of the cherries under cover. “Cover results in fewer losses and fewer cracked cherries, and the cherries can hang a bit longer for better colouring and larger sizes. Trade mostly asks for 28+ and 30+ cherries.” The central sorting – for fruit size, colour and quality – and hydro-cooling, for an optimal shelf life, ensure a uniform product that’s sold in cardboard packaging of five kilograms under the Truval brand. “Recognisability creates trust,” Diether explains. “We’ve noticed that this approach leads to repeat purchases.”

Annually, BFV markets 2.5 to 2.7 million kilos of cherries, grown on 300 hectares, of which about half is sorted centrally and marketed under the Truval brand. The other half is sorted by the growers and packed in five-kilo wooden crates. “Supermarkets prefer cardboard packaging, and export mostly prefers wooden crates,” Diether says. For the coming season, he expects sizing to fall behind for early cherry varieties due to recent weather conditions. “Hopefully, the later varieties will experience a positive sizing correction.” BFV exports about 50 per cent of their cherries. Diether mentions that although new cherries are being planted in general, BFV isn’t striving for an expansion of the area.

Difficult start
BFV also mentions a difficult start of the strawberry season due to the large supply of greenhouse strawberries. “Pricing was modest in greenhouse productions,” Diether says. He has noticed that the Sonata and Sonsation varieties were the most successful varieties at the start of the season. “In the past, these varieties weren’t planted on a massive scale, but Sonsation and Sonata have now practically wiped the Clery variety from the map because these are very flavourful strawberries that are incredibly popular in retail.”

When the strawberries from tunnel production arrived on the market mid-May, and export to Scandinavia, France and the UK got started, pricing clearly improved. Early in June, a decline in supply was obvious. Diether mentions that greenhouse and tunnel production of Elsanta is declining rapidly. Additionally, the strawberries of the ever-bearing varieties Portola and Verity and the late production of Elsanta are expected early in July. “In the coming weeks, we’re trying to absorb the shortage in strawberries with fruit of the ‘June-bearer’ Elegance,” Diether continues. All in all, there are fewer strawberries, although demand is high, resulting in much higher prices.

Considering the pricing of soft fruit, Diether says that if climatological conditions are against the growers, it’ll be very difficult to sell soft fruit. As an example, he mentions strawberries, with which Belgium is a major player, and for which they are partly dependent on export. “In April and May too many strawberries arrived when the market wasn’t ready for it yet. When you have such a large supply and there are players like France who have their own strawberries, or Scandinavia that buy no or few strawberries because it’s only ten degrees Celsius there, that results in an oversupply which leads to serious price drops.” The large – and in Eastern European growing – supply of summer fruit is also playing a role in pricing.

Redcurrant
Every year, BFV sells around 300,000 kilos of redcurrants, mostly of the Rovada variety. The newer Haronia variety was planted only recently. “A lovely, promising variety.” Diether mentions that 60,000 to 70,000 kilos is stored in ULO cells, so that sales can be spread out. The berries are sold to both consumers and to industry for processing into products such as jams and juices. Part of the redcurrant production is exported, including in 125-gramme frozen packaging to France or in bulk packaging of 500 grammes to Dutch wholesalers.