The process to ratify the EU-Mercosur trade pact will be “complex” due to the discontent of EU agricultural sector and the domestic politics of countries like France, Argentina and Brazil. This is the opinion of an expert from the Spanish think tank Elcano, Carlos Malamud, an expert on Latin America-EU relations at the Real Instituto Elcano. He warns that it could take two or three years for the commercial part of the agreement to be approved and up to five years in the case of political dialogue and cooperation.

Although the political agreement was signed on 28 June, after 20 years of negotiations, Malamud notes that there are political dynamics that would hinder the final pact ratification, FTA which would create a market of 780 million consumers and would save Europe €4 billion a year in tariff duties.

“We have to pay attention to the noise caused by those sectors most affected by the signing of the treaty, some business sectors in the Mercosur countries and the agricultural unions in Europe”, the professor says. 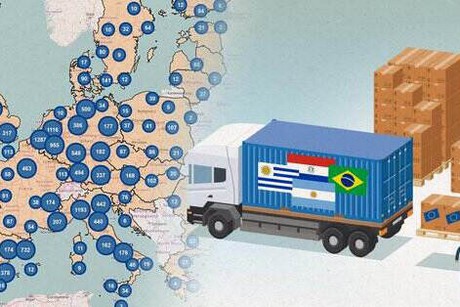 France, Europe’s main obstacle
As far as Europe is concerned, Malamud points out that France, Poland and Ireland have “powerful” agricultural sectors, which have questioned the agreement because it puts them at a disadvantage and because of the supposed danger represented by meat and other food from South America, where the same legislation does not exist as in Europe.

The French Government, he says, has been reluctant to support the FTA because of the recent revolts of the “guillets jaunes”, linked to rural populations.

One of Macron’s main arguments has been that Brazil should commit to remain within the Paris Climate Agreement and stop the Amazon deforestation. Malamud considers, however, that the president’s position is a response to domestic political pressure, rather than to international considerations.

On the possibilities that the Brazilian government’s environmental policies will hinder the agreement progress, Elcano’s researcher comments that “it is true that an important section of the economic elites and the authorities of the Ministry of Economic Affaires have adopted a clear open policy, which at the moment is taking precedence.”

… And Argentina in the Americas
Although the agreements would be approved in the parliaments of Uruguay, Paraguay and Brazil, according to this expert, another obstacle would be the presidential election in Argentina in October, where the candidate Alberto Fernández has questioned the FTA.
Argentine wine producers have spoken out against the agreement due to asymmetries between the local and European companies, as the EU allocates around €900 million a year to promote its wines, which, coupled with lower tariffs, would harm the Argentine sector.

Who are in favor in Europe?
The European employers’ association BusinessEurope is undoubtedly in favor, stressing that it will open up a market of 226 million-consumers wanting access to European goods and services.
The chambers of commerce, represented by Eurochambers, have also urged members to seize the “opportunity” and ratify the FTA so products would enter the region without tariffs in key sectors such as automotive, machinery, chemicals or pharmaceuticals.

The so-called Spanish Club of Exporters and Investors note “the margin for improvement is very important”, pointing out that goods sales to Mercosur reached €3.9 billion in 2018, 1.4% of total Spanish exports, which places Spain as the EU's fourth supplier in that region, after Germany, France and Italy.

EU-Mercosur trade relations
Mercosur is the main supplier of agricultural products to the EU, with a share of 20% of the total, and almost of 70% of the products for animal feed. Around of 80% of the beef imported into Europe comes from this region as well.

EU companies pay €4 billion in tariff duties each year when exporting to Mercosur countries. The EU economy is heavily dependent on exports, and Mercosur is the EU sixth most significant market destination.

Should this agreement be concluded successfully, the EU will have FTAs with most countries in the Americas, with the exceptions of Cuba, Venezuela and Bolivia. This would boost the EU’s economic position in Latin America, especially in relation to other great powers like China.

Spanish position regarding the EU-Mercosur Trade Agreement
Regardless of the political color of its governments, Spain has always been interested in seeing this agreement come to fruition.