Larger volumes will arrive in about two weeks

The starting signal for the Egyptian sweet potato season sounded this week. A few weeks earlier than usual, the first new goods arrived in the Port of Rotterdam at the beginning of the week and they have already been successfully marketed to some extent, confirms Mohamed Moustafa, Managing Director of Elbfresh GmbH, which is based at the local wholesale market. "We expect the first larger shipments of the appropriate quality in about two weeks."

Sweet potatoes from Egypt are immediately marketed on arrival at the wholesale market Elbfresh stall.

Very early this year, the specialized importer welcomed the first sweet potatoes from Egypt. "Although they are significantly cheaper than the goods from the US, they are not top quality. These early sweet potatoes come from northern Egypt, while the main crop mostly comes from the east and south. Of course, we hope that the US surplus has disappeared from the market when the larger volumes from Egypt will arrive at the end of the month," Moustafa says about the current market situation.

Almost empty market
Otherwise, the current conditions for the start of the Egyptian sweet potato campaign look pretty good, says Moustafa. The supply of goods from the Iberian Peninsula is not expected until late summer (early September). Until then there are hardly any major providers in the market apart from Egypt. "In the period in which Egypt is on the market, we have little competition in terms of sweet potatoes. There are some from Morocco and other African countries, but not in market relevant quantities."

In 2017, the European market imported 244,000 tons of sweet potatoes; in 2013 it was only 96,000 tons. Fast growing markets in Europe include the Netherlands and the United Kingdom. The import figures are also rising in France, Germany and Belgium. This windfall was also felt at Elbfresh GmbH: "Demand is still seeing nice growth rates both in food retailing and in the catering sector. The Beauregard variety is currently still the most popular, but the Desert variety from Egypt is catching up." 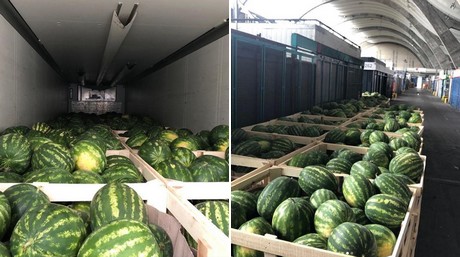 Watermelons currently mainly come from Morocco, as well as from Albania, a relatively new country of origin.

Other seasonal items
Just under a year ago, Elbfresh came into being formed out of former company Green Star. Under the new company label, mainly North African fruit and vegetable products are traded. "At the moment, watermelons are a seasonal hit, and we market both Moroccan and Albanian products. Although Albania is relatively new to the market, the product has an excellent taste."