A simple act with major consequences

That a simple act could have major consequences has become apparent from the latest optimisation effort made in the handling of blueberries. Nowadays, sorting machines very quickly sort blueberries supplied in bulk for all kinds of quality requirements. Compared to manual sorting, an enormous gain was made as a result.

The continued optimisation of that process is now being worked on. After all, the speed with which the machines handle the berries could be higher if an improvement effort was made in the very first step of the processing process: the input of berries. By automating the input speed, the entire process from bulk to final packaging could improve, according to Thomas de Meijer, Senior Mechanical Design Engineer for BBC Technologies. 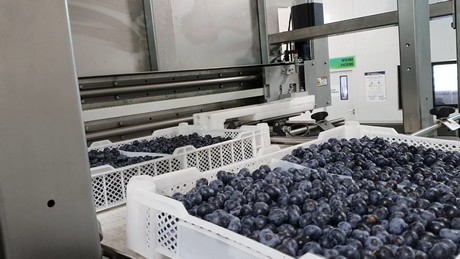 To this end, the Tray Tipper was developed by BBC Technologies from New Zealand, which became part of TOMRA last year. The automated tray tipping mechanism guarantees a more consistent input and more even distribution of the blueberries in the next step in the process, the optical sorter KATO260, compared to manual input. Feedback from the KATO260 to the Tray Tipper ensures an optimal throughput.

“When there are no bumps in the input, performance of the KATO260 and the following packing lines improves considerably,” Thomas explains. The average size of blueberries plays an important part in this. “Imagine if the average diameter of berries in a box supplied by a grower is 15 mm. The KATO260 handles 280 berries per second, and you can thus decide the exact input speed needed for the optical sorter for the bulk crates. When the average size changes, to 18 mm for example, that proportion also changes. Sometimes that means 10 o 30 per cent more crates have to be put in per minute.

On the side of input, such a small difference in average size of 3 mm in bulk can barely be noticed. However, the optical sorter does notice it, and by providing feedback it can adjust the input speed of the Tray Tipper.” Emptying crates might seem like a simple act, but it’s difficult to do well. The Tray Tipper doesn’t completely shut out humans. Thomas: “It’s still necessary that employees put the trays on the input conveyor. It might seem obvious that they’d also tip the trays, but besides the fact that the Tray Tipper is more consistent and even, it’s also quite difficult to carefully keep up that process for eight to ten hours. Tipping the trays requires quite a bit from our employees, and a machine doesn’t complain and will always continue to do it well.” 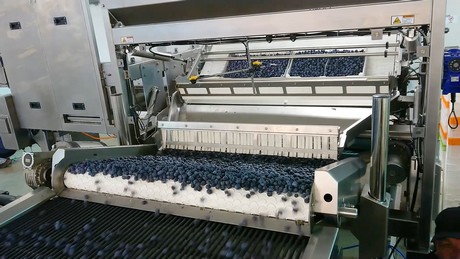 Optimising the input ensures an optimal continuation of the performance of the entire line, and as a result, the handling speed is much quicker and that can already fill in part of the capacity increase. Estimates show that the production of blueberries will continue to increase in the coming years. For processors, that doesn’t mean investments should proportionally increase as well.

“Just like with the cooperation between Tray Tipper and KATO260, KATO260 can also cooperate due to intelligent, mutual software. When an even higher capacity is desired, it’s not immediately necessary to invest in a new line, because the flows of two KATO260 machines can be bundled, doubling handling capacity,” Thomas concludes.