Packages no longer last for years, sometimes they even change per season. That requires packing lines that don’t just process products quickly, they also have to be flexible in use. 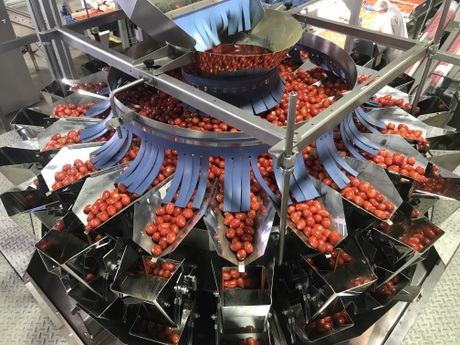 In Den Berk Délice’s packing shed in Merksplas, Belgium, they’ve had a new machine in operation since late April: the Multipacker XL. With a capacity of 80 buckets per minute, the machine is surprisingly fast, and that’s not all, according to supplier Paul Koppert of Koppert Machines.

“The machine now very neatly fills 80, but we’ll gradually be increasing that to 90 per minute.” As a result, the machine will be twice as fast as its predecessor, which processed more than 45 buckets per minute. He explains: “This is a new version of our Multipacker, which we’ve had in our range for a number of years, and which has proven itself for major production companies and packing stations globally. Last year, we developed one with a double capacity, the XL version, although it’s still flexible regarding types of packaging. This machine was meant for cardboard punnets and flow-packs, and has now been in operation for a German customer for more than a year. In consultation with Den Berk Délice, we came up with the idea to also apply this concept to buckets.” 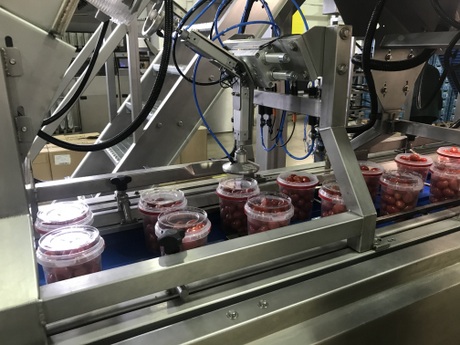 Flexibility increasingly important
“This machine can do anything in principle, as long as the packaging is round and requires a lid. Whether it’s a 500 or 250-gramme bucket like for Den Berk or 350 or 175 grammes, it doesn’t matter. That flexibility is very important. In the past, major growers and packing companies had some mono-lines that did one type of packaging and that was it. That’s really no longer an option nowadays. Supermarkets tend to easily switch from plastic to cardboard or from square to round. You can only respond to that when you have machines that can be used for multiple applications.” 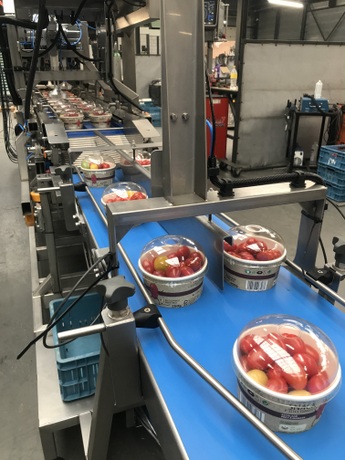 Increasing demand for large and small packaging
Den Berk Délice uses the machine for 500 and 250-gramme packages. The buckets can be either plastic or cardboard. The latter allows the Belgian tomato grower to save nearly 85 per cent in plastic. The cardboard buckets do get a plastic lid, because the product needs to be visible for consumers. To use the machine as optimally as possible, a good schedule is made in advance. “For example, we have to switch between packaging as little as possible. That switch takes about 20 minutes. We prefer packing everything on the day it’s harvested,” says Loes van der Velden of Den Berk Délice. “These are incredible amounts, so we don’t want to switch too often.” It’s not without reason that the machine is used for these two packages. “On the one hand, we’ve noticed an increase in large packaging because more snack tomatoes are consumed, but on the other, the trend of on-the-go snacking means an increasing demand for smaller packages.” 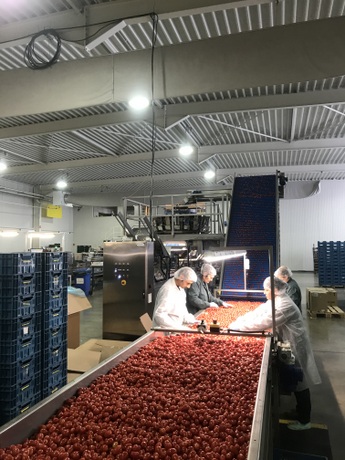 New packing line
The Belgian tomato grower is happy with the arrival of the new packing machine, which is part of a new packing line. Loes: “With the construction of our new seven-hectare production location Den Horst in Merksplas and the plans we have for the future, we were in desperate need of additional packing capacity. Besides, there’s still a lot of demand from the market for this type of packaging.”

The buckets are usually supplied pre-printed with either the Den Berk Délice label or the customer’s design. On site, the buckets are only provided with a code to find out shelf life and traceability. The crates of recently harvested tomatoes are emptied on a conveyor belt that transports them, after a quality inspection, to the weighing machine that accurately weighs the correct amounts up to the percentages. The buckets are filled with tomatoes and equipped with a lid. They are then placed in casks and stacked for transport. 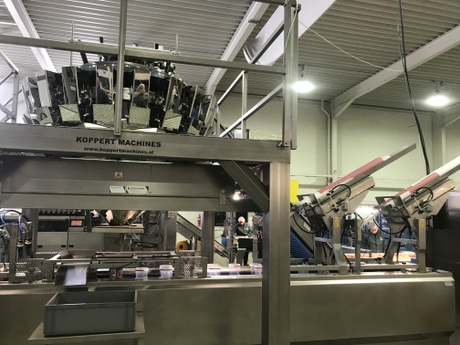 Service during outages
Koppert Machines has sold two more Multipackers XL two months after they sold one to Den Berk. Yet the first delivery is always exciting. Does everything work as well in practice as it does on paper? Paul: “I supplied the first machine late in April, and I knew they had a large order of more than 100 pallets a week later. When I didn’t hear from them that week, I rang them to ask if everything was going well. It turned out they had handled the order without any problems. I think that’s quite impressive after one week, and this also says something about the user-friendliness of this machine.” 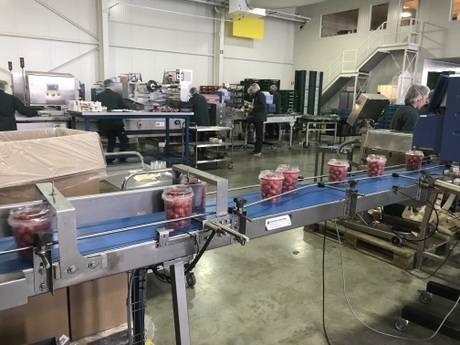 Should there be an outage, it can easily be solved due to the means available nowadays. The machine has an internet connection, so the supplier can see what’s happening from a distance, and they can even solve things without being on site.

Hendrik Vervoort, responsible for packaging for Den Berk, gives an example: “A certain, printed bucket wasn’t always detected by the sensors, so that the bucket wasn’t filled. We couldn’t immediately find out how that was possible. We rang Koppert’s services department, who quickly found out the problem was caused by a photo cell. They made a minor adjustment to the sensor, and every bucket was filled again after that.”

Paul: “We now put this option in our machine as a standard. It can make quite a difference, particularly for customers whose locations are far away, when you don’t have to send in a mechanic because you can just go online to find out what the problem is and solve it when necessary.”