Even though the EU treaty with Mercosur (Argentina, Brazil, Uruguay, and Paraguay) was announced on June 28, the Commission and the Spanish government still haven't clarified the specific conditions it has set for the citrus sector. The Ministry of Agriculture of Brazil, however, has already done so: tariffs on Brazilian concentrated orange juice will progressively disappear in 10 years and those on 100% squeezed juice - which is strategic for the Spanish industry - will disappear in 7 years.

Customs duties on the imports of fresh oranges and mandarins will also be eliminated. However, there still are no details on the deadlines to do so. Based on these parameters, the Citrus Management Committee (CGC) - the association that brings together the main exporters of Spain - warned about the direct impact that this agreement would have in the medium term on the country's juice processing plants, which in turn will have an impact on the income of citrus farmers. The lack of a certain destination for the 650,000 to 800,000 tons (MT) of oranges harvested each year that are unsuitable for the fresh market and that gain value from being used to make juice will have serious economic repercussions for producers and could degenerate into an environmental problem derived from the management of fruit leachates. 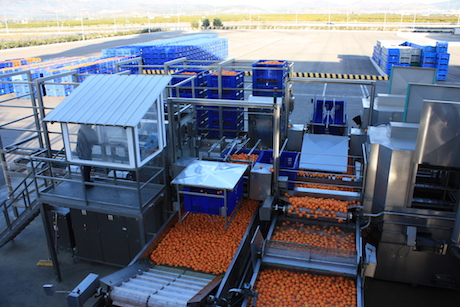 The first phase after unloading in a processing plant

In the opinion of the CGC, the competition in Europe between two leading but antagonistic citrus growers, the Brazilian producers (which are almost exclusively devoted to the juice industry) and Spanish producers (who works for the fresh market), is going to be very complicated without the tariffs that, up until now, were barely protecting European producers. Spain, which is the fourth or fifth largest producer of citrus (with about 7.5 million tons) and the sixth biggest producer of oranges, specifically, markets up to 5.6 million tons of fresh citrus and is the leading exporter of fresh citrus as it exports 3.7 to 4.2 million tons per season. It is also the leading exporter of citrus thanks to the community market, which accounts for 91-93% of its foreign sales and practically all of the juice it produces from these fruits. Meanwhile, Brazil, despite being the second producer of citrus fruits and the leading producer of oranges, barely exports them fresh. However, it is by far the largest processor of juices on the planet (it transforms an average of 12 million tons). The distribution of 100% squeezed-juice in the European market is already unequal: Spanish sales by volume amount to 250,000 / 300,000 MT but Brazil almost triples those figures.

The costs of the Brazilian agrarian model based on juice - with huge plantations in the hands of a few owners and a production system that is much less demanding than the one needed to produce fresh products - are unattainable for the Spanish citrus industry: producing an orange in the South American country is at least three times cheaper and harvesting it up to ten times cheaper. This system in the field, in turn, generates economies of scale in the transformation process and in the logistics for its sale (95% of the Brazilian juice is exported). The three large Brazilian corporations that control the land and juice plants - Citrosuco, Cutrale, and Louis Dreyfus - own fleets with large vessels and place their product in the ports of Rotterdam (Netherlands) or Ghent (Belgium) at almost the same price that Spanish processors pay to transport their juice from Andalusia, Murcia, or the Valencian Community to France by tanker. According to the CGC, these monopoly conditions could tempt Brazilian producers to work as a cartel when setting prices, both of their offer and international prices.

The strengthening the Brazilian offer in the European market, where they already have the majority of the juice market (both in the 100% squeezed sector and in the concentrate sector), thanks to the elimination of tariffs, will allow them to lower prices more, which inevitably would affect the Spanish industry. As a result of the gain in market share of the three Brazilian giants, producers will leave in the fields the oranges that were previously used to be processed, as their value won't cover collection and processing costs. That will inevitably have a very serious impact on their income. 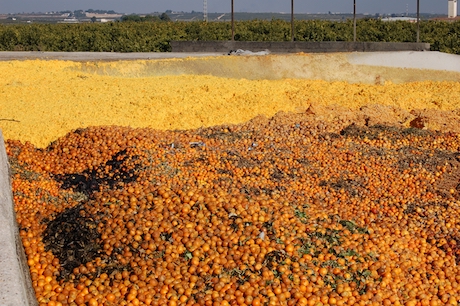 Orange remains being dried. Citrus can cause environmental problems due to the leachates they generate.

Environmental, phytosanitary, and social requirements in Brazil are much less demanding than in the EU. Its citriculture, in addition, is known for the high levels of affectation of the most feared diseases: black spot (citrus black spot, CBS), citrus variegated chlorosis (CVC), citrus canker or citrus greening (HLB). To stop the spread of the insect that spreads this last bacterium, large producers conduct 18 to 24 aerial sprays (a practice banned in the EU) with neonicotinoids that are very restricted or banned in Europe due to their toxicity and environmental impact.

"The elimination of tariffs will harm the Spanish processing industry, affecting tens of thousands of Spanish citrus farmers; while in Brazil it will only favor three multinationals, not the small and medium Brazilian producers," stated the president of CGC, Manuel Arrufat.

Leachates
The CGC also warned about the environmental problem there could be if citrus farmers were unable to divert the fruit that has skin defects or lacks caliber but has good organoleptic quality to the juice industry. If producers can't divert these fruits, they would stop collecting 15 to 20% of the harvest, which could turn into unused waste that would generate leachate, contaminating the soil and water, and that could multiply the presence of fungi and pests in the countryside