Members of the 'Next Big Thing Growers’ Cooperative' estimate that the 2019 crop of SweeTango® Apples will be of excellent quality with a range of sizes and abundant conventional and organic availability.

SweeTango is an early-season variety that is available each fall, with harvest slated to begin late August. The Western region of the U.S. begins harvest first, with Midwestern U.S., Eastern U.S., and Eastern Canada regions picking shortly thereafter. SweeTango’s peak season is from September – November. The Cooperative cites annual Nielsen scan data which ranks it as a best-selling club variety and is frequently in a top ten position for all apples sold during September - November. 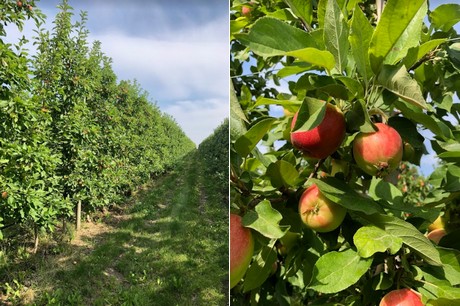 Estimates point to a volume slightly larger than 2018 as well as the 5-year average, with the organic crop yield continuing to increase year over year. Roger Pepperl, marketing director at Stemilt Growers in Wenatchee, Washington commented on the organic outlook, “we’re looking forward to a nice organic SweeTango crop this season, with picking and packing starting late in August so shoppers should see them in stores by September 1.”

“Overall fruit quality will be excellent, with SweeTango exhibiting its signature crunchy texture, sweet-tart flavor, smooth finish, and beautiful red coloring,” said Jennifer Parkhill, executive director of Next Big Thing. She noted that “minimal weather events have been reported from growing regions to date, although a wetter-than-normal spring in some areas could result in minor russeting. A range of fruit sizes will be available to support strong early-season bulk and bagged apple sales. The popular high-graphic 2-lb SweeTango pouches will again be offered this season.”