When it comes to short distances, lorries still win from trains, but for longer routes, railway transportation could definitely become more important in the coming years, as it doesn’t just relieve our current problems in road transport, it also contributes to a more sustainable type of transport. The train has already proven an effective part within the modal shift that companies use to find alternatives for road transport. 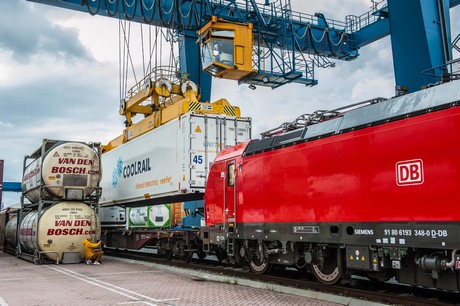 In May 2019, CoolRail’s first reefer train left from the Port of Rotterdam to Valencia Spain. The train, an initiative of Euro Pool System (EPS), a division of Euro Pool Group, was specifically set up to transport fruit and vegetables from Spain to the Netherlands. The train as an alternative for road transport has a long history. “Before the crisis of 2008, the Spanish government was looking for a solution to the increasing traffic jams on the Spanish-French border,” says Fred Lessing, coordinator of the CoolRail project. “One option was to use railway transport, although Spain has a different railway width than the rest of Europe.” The design phase of CoolRail started in 2012, and a modal shift – a shift from road to railway transport – was researched to see if that could be a solution for the future. The reasons for the project were the challenges in road transport, congestion on European roads and air pollution.

Fred: “In 2012, we worked with two partners, Bakker Barendrecht and Flora Holland, to see if there was an option for a railway connection for the fresh produce sector to Spain. Flora Holland left the project due to a reorganisation, but we’re still working closely with Bakker Barendrecht. In the following years, we gathered other partners for this project, and this year we definitively launched CoolRail.” 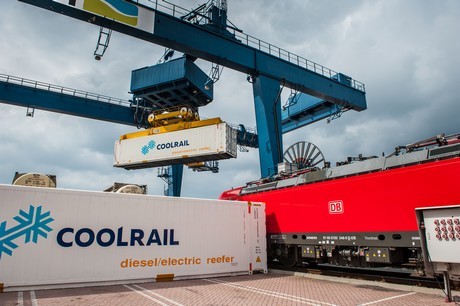 For EPS, sustainability and striving for a circular economy were important aspects to start the CoolRail project. “With our reefer train, we’re saving 42 lorries on the roads, we save up to 22 million kilometres annually, and we can realise a CO2 reduction of between 70 and 90 per cent,” Fred says. “The train has been completely set up to transport fruit and vegetables from Spain to the Netherlands. To Spain, the train is loaded with crates of the Euro Pool System. In future, we could also load the train with other products, such as frozen chips, for Spain.”

Speed
In railway transport, cooperation is a key concept in addition to sustainability. It’s impossible for one party to maintain the train on certain trajectories. However, parties that want to join are a bit hesitant. To them, there’s one major aspect that’s important in the transport of fruit and vegetables: speed.

Road transport is just a bit faster, because you can work with two drivers for this type of modality. The train loses speed because regulations differ per country. Fred: “We’re dealing with speed limits on railways. For example, in most countries, 100 kilometres per hour is the limit, although 120 kilometres would also be a possibility. Moreover, our reefer train has to get out of the way when a passenger train has to pass by. Besides, we have to use different locomotives in Spain, France, Germany and the Netherlands. Engine drivers are limited to which trajectories they can drive, and that also causes delays. Our project has most delays in Spain, because we have to switch to a different rail width there.” The costs of the railway and road transport are the same now. “The costs of road transport are very likely to rise in future, and we expect the railway transport costs to remain the same.” 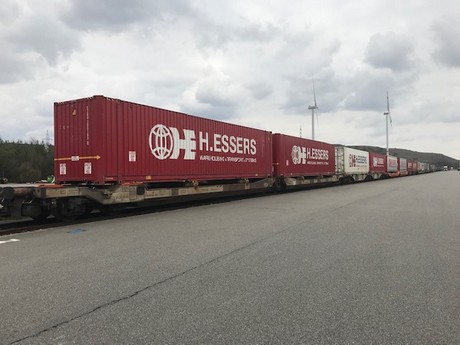 Transporter H. Essers from Genk has a lot of experience with fresh produce transport per railway. “We offer four transport modalities: rail, road, short-sea and inland shipping,” says Hanno Reeser, manager of H. Essers. “Via rail, we have connections to Romania (six times per week) Turkey (four), Greece (four), Poland (two) and China (two). Our focus is on chemicals, pharmaceuticals, high-quality products and other products that require us to be able to regulate temperatures. Fresh produce fits that picture, and we’ve seen that this market is growing. We can therefore offer the transport of fruit and vegetables when customers ask for this, and we transport via rail from terminal to terminal. We do the first and last kilometres to our destination by lorry. By combining reefers on one train, it’s not necessary to set up a separate train for fruit and vegetables.”

The advantage of these company trains – goods trains owned by companies – is the frequency of trips to their destinations. For example, H. Essers has one train transporting multiple goods, and not just fresh produce. Hanno: “With trains like these, we can go to Romania up to six times, and customers can easily attach their containers if necessary. That means it’s easy to use the train, which is good for the environment. Because multiple trains leave every week, we can guarantee the duration of these trajectories for our customers.” 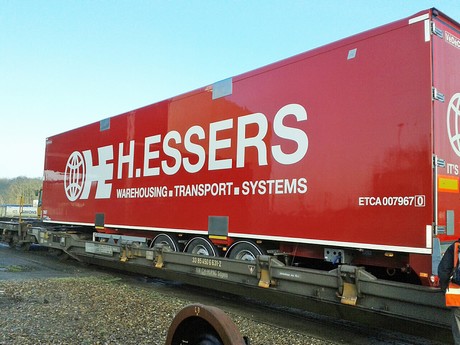 Fred Lessing, however, mentions the benefits of reefer trains that have been set up specifically for the fresh produce sector. “Naturally, there are reefer containers with fresh products on the train to Italy, for instance. These are placed on mixed trains. In the world of trains, locomotives are separate from containers. CoolRail’s project is unique because we as shipping agent rented the reefer containers for the transport to Spain. This way, we’re much better able to take other parties along on the train to Spain. The start of our project took quite long, because a lot of parties we approached had a slight touch of cold feet. Switching to a modality such as railway transport requires a different mindset from the traders than they’re used to. Speed is very important for traders in that respect.”

New Silk Road
Due to the rise of train as transport, a link is easily made to the ambition of China to connect Europe and Asia via rail. There are two different routes towards China from Europe. A Northern route via Russia and a Southern route through Central Asia. The routes could become a faster alternative for sea transport, and cheaper than air transport. Both H. Essers and Nunner Logistics are involved in developments.

On the route to Asia, Nunner Logistics sees opportunities to transport fresh produce between China and Europe in future. Erik Groot-Wassink: “We have the technical opportunities for this at our disposal. The big problem of the Northern route is the political aspect. The Russian embargo on European fruit and vegetables means we can’t transport fresh produce via this route. The Southern route is used less frequently. The transport of seed potatoes and other seed crops, products exempt from the Russian embargo, proves we can transport fruit and vegetables to China via this route. Right now, transport of fruit and vegetables to China is still minimal, but this could change if infrastructure of the Southern route continues to improve. However, I think this could take up to dozens of years.”

H. Essers considers this embargo to be the biggest problem of the transport of fresh produce products to the east. Hanno: “The transport of fruit and vegetables per rail to China is still limited. In future, more transport will occur via rail between China and Europe. Products that are now flown in will be put on trains more often. If the communication on railways improves, and we can use smart containers more often, this will also be a pull-factor to use railways.” H. Essers already has a cold-chain connection from Europe to China via rail, and they book about 20 containers per railway to China per week.

By improving the infrastructure and facilities on the Southern route, it becomes possible to provide any necessary maintenance on the reefer containers in transit. “The maintenance of the containers can improve considerably along the trajectory by setting up various terminals along the route,” says Erik Groot-Wassink: “Due to these various points along the route, we could pick out any broken reefer and repair it so that the shipment isn’t lost. Besides, it’s possible to save time on any future trajectory to Asia by putting the shipments through all of the inspections and providing them with the correct documentation in the Netherlands.”

When asked if they’re not worried about the Chinese influence this initiative could have in Europe, the answer is an unhesitating no. Hanno Reeser: “This route to Asia is mostly an option to transport products from Europe to China in a manner that’s faster than by sea.” Erik Groot-Wassink: “We’ve noticed that the import/export balance is recovering thanks to this route. As a result, there’s now more export from Europe to China than a few years ago.”