For the eleventh time since 2008, Interpera, the international pear congress, has hosted one hundred and ten producers, processing companies, nursery growers, experimental centers and marketers in Europe, from 25 to 27 June 2019 in Tours, France. The presence of these experts originating from 9 countries (France, Spain, Italy, Portugal, Holland, Spain, Belgium, Turkey, Greece, South Africa, The United States and South Africa) made it possible to offer participants a broad spectrum of the sector, from production to recent developments and to future prospects.

The forecasts of summer pears production in Europe have underlined the bad weather and the instability of the climate during the current campaign, in all the European producing countries, which will, most certainly, result in a reduced production. In 2018, the European pear production reached 2 370 000 tons. 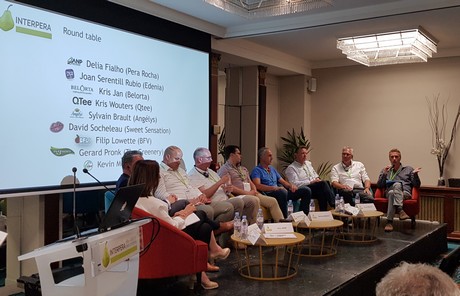 The afternoon presentations focused on research and varietal innovation, as well as on practices undertaken to respond to societal expectations, particularly within ecologically responsible orchards.

For the co-organisers of the event, represented by Daniel Sauvaitre, President of the French Apple Pear Association (ANPP) and Jean-Louis Moulon, Vice President of AREFLH "the objective of the congress is to stimulate the pear sector, in this way, Interpera 2019 it has largely achieved its goal, through the intense sharing of experiences and the exchange of information of these three days ".

The congress closed on the announcement of the 2020 edition host country: it will be the Netherlands and the Dutch Produce Association (DPA) that will organise the event, still in partnership with AREFLH.