Cherry grower gets chance to exhibit at OPS

One cherry grower has been waiting three years for this show.

“We started our program growing organics four years ago and we didn’t have organics when the show started,” says Mac Riggan with Chelan Fresh in Chelan, Wa. “People were exhibiting at the show for years and they just didn’t have any room. We had our name down on a waiting list for three years and a spot finally opened up.”

What Riggan knew about the show is that it attracted a very concentrated group of buyers. “The organic buyers are very engaged in what’s new and different and innovative,” he says. While it’s tricky for Chelan to make it to the show—it runs in the middle of cherry season and since it’s not a main distribution hub, Monterey, Ca. can be challenging to get fruit to—Riggan doesn’t mind. “Logistically it’s not the easiest show to exhibit at but it’s worthwhile,” he says. 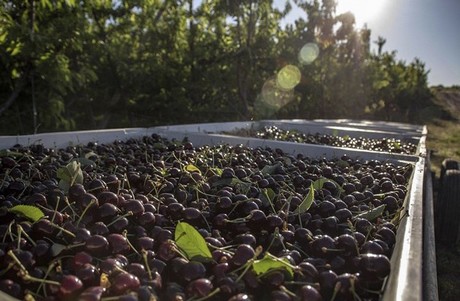 Packaging on show
At Chelan’s booth there will be one area of focus—its organic packaging that’s in its second year. “The packaging does a good job of calling out that it’s organic to the customer,” says Riggan. “We’re trying to make that packaging look very clear and shoppable in the consumer’s eyes so they don’t have to figure out if it’s organic. It also tells you the varieties you’re buying and in very big font, how many lbs. you’re buying.”

Chelan will also have on display its organic dark sweet cherries and organic Rainier cherries along with its exclusive but non-organic Orondo Ruby cherry.

Overall, Riggan notes the cherry crop is down in Washington. “The wind has been marking up the cherries and some varieties of Rainiers have been down 30-40 percent in some blocks and other blocks haven’t been picked at all because of the marks from the wind. Red cherries have also experienced sporadic rains and thunderstorms,” he says. “It’s not a disaster. There are plenty of cherries. We’re just taking it from what we thought was one of our second-biggest crops to one of our more normal crops in five years. We thought as an industry we’d hit nine million boxes in June and we barely hit eight million.”

He adds that going forward, certain dark red varieties are down 10-15 percent but that there’ll be plenty of volume to promote in July. 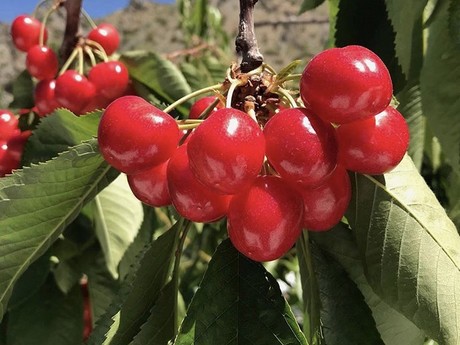 The Orondo Ruby cherry will be on display at Chelan's booth.

Pipeline back up
Riggan also notes that it’s only recently that Washington cherries have made their way onto the market. “We started a little later than last year. California had a lot more fruit in the pipeline in the end. Their crop was cut just about in half but most of that was cut off in the front end. So they finished with pretty good volume of crop but I don’t know what the quality was like,” he says. “So we actually just saw some Washington cherries four or five days ago and they’re selling well.”

And while he thinks there’s some California product still making its way through the system, to a minor extent, British Columbia may compete with Washington. “It competes with us in Canada but their crop isn’t very big,” he says. “I do think in light of the fact that the U.S. has a tariff in China, it really opens the door for Canadian cherries to go to China without that tariff.”

Overall, Washington could end its cherry season in early August. “And pricing right now is okay,” says Riggan. “There’s potential for it to get stronger in late July and definitely in August.”

Meanwhile back at the OPS, Riggan says his goal for the show is to just ensure that people know Chelan has a large supply of organic fruit. “And with this show, we may have come to the dance late. But we’re dressed up and ready to dance,” he adds.