Comproagro is an app that connects Colombian farmers with consumers, allowing them to sell their produce without any intermediaries. It has more than 26,000 users in 29 departments in the country and its creator hopes it will develop offshoots around the world.

Two years ago, Colombian farmer Oscar Garzón, was approached by  a client who saw his products on the Comproagro website. “Since I started selling my lettuce online, I have received a lot of calls,” says Garzón, who produces vegetables and potatoes, and has doubled his profits by selling directly to consumers. “I’m very happy because being able to negotiate directly with the client allows me to sell at a fair price.” 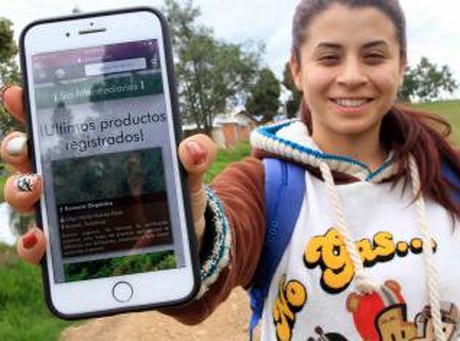 Created by Ginna Jiménez in 2015, Comproagro is an online platform that allows Colombian farmers to offer their produce directly to consumers, enabling them to negotiate not only the price but also the payment and delivery methods.

According to an article on thenationonlineng.net¸ Jiménez, who comes from a family of farmers herself, was only 15 years old when she launched the website. She was inspired when officials from the Colombian Ministry of Information Technology and Communications visited her school and discussed supporting innovative business projects with digital tools.