During the annual meeting of the Hellenic Federation of Enterprises, Greek kiwi exporter Zeus was chosen as a winner, an example for Greek entrepreneurship amongst a total of eleven nominees. The event took place at Megaron Athens concert hall and was directed at all businesses, including oil, tourism and airlines.

The event was held at June 18 and was meant to put some extra shine on the success stories of Greek businesses. As the agricultural sector is not very big compared to some of the others, like oil and tourism, it came as a surprise that Zeus was actually chosen as the best example for future Greek entrepreneurship: “Zeus selected as success story among Greek entrepreneurs. We are a major producing organization, but since our business is so small compared to some of the other big companies, it’s definitely a huge compliment to Zeus.” Christina Manossis, export manager for Zeus, explains. 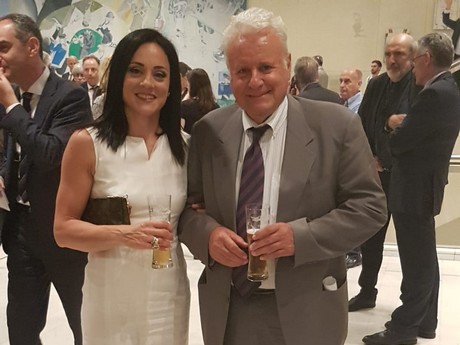 Christina Manossis with her father Dimitris Manossis, the president of Zeus Kiwi SA.

“Unlike the other nominated businesses, in our field it is very hard to follow a successful business model, which will remain viable for the years to come. Since 100 per cent of our produce is exported and we work with 350 growers from Greece, we do very well in a sector that simply is not very consistent,” Manossis said. “One of the reasons we were chosen as the winner of the evening was our Research and Development program for new kiwifruit varieties, which is not common practice in our sector in Greece. Some of the other nominees also do amazing work, but I am very happy Zeus got recognition for the way we work, it means our company is on the right path and should keep moving forward in this manner.”