... and why hydroponic grown lettuce is the answer

"Food safety has a different meaning in Europe than in America”

“When you talk about food safety in America, you talk about a different topic than when you talk about food safety in Europe. In Europe, growing safe is about growing without residues of plant protection products, whereas growing safe in America is defined by the absence of pathogens in food.” That’s what independent crop advisor Kurt Cornelissen sees when supporting vegetable companies in both markets. Remarkably, one of the different interpretations is how growing lettuce on water offers a solution to both. No wonder this type of growing is turning heads around the world, he says. 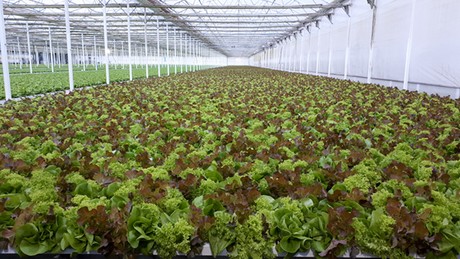 Almost everyone agrees that growing lettuce on water offers great benefits. Which grower says no to higher yield per square meter, less water use and a higher level of automation, while offering better food safety and offering a product that is appealing to retailers and consumers? But hold your horses for a second. It takes more than just a nice installation to get you there.

In 1994, Hortiplan, a Belgian developer of automated cultivation systems, installed their first "Mobile Gully System (MGS)” in Belgium, making it possible to grow lettuce in movable gutters, with the roots not in soil but in water. Over the years, this way of growing on water has become increasingly known and lettuce is being grown this way around the world.

Scandinavia
However, growing lettuce on water originates from Scandinavia, Kurt points out. “This way of growing started in Sweden, where growers wanted to grow lettuce outside the short, regular summer season. Growing on water then was adapted rapidly in surrounding countries. Nowadays the Scandinavian market is mature, with little room for additional investments.”

In other parts of Europe and in the years following the Swedish introduction, hydroponic growing of lettuce kicked off for a different reason. A Belgian grower wanted to bring a new product to the market and chose hydroponically grown lettuce - packed with the substrate attached to it. "At first retail was very reluctant, believing this product to be difficult”, Kurt recalls. “Initially they said the substrate added weight for no particular reason, bringing potting soil and dirt into the supermarket. Later on the benefits of a higher level of freshness and a lower product loss became clear. Especially having to throw out product is something a retailer wants to avoid badly, since they pay thrice for this.”

A quarter of a century later, a handful of Dutch and Flemish growers meet the domestic demand for ‘living’ lettuce, sold with their roots attached to the crop. The majority of the hydroponic growers grow in a Mobile Gully System because the automatic spacing ensures a much higher productivity and demands less labor compared to other systems such as floating rafts. In the meantime the market has diversified. “Traditional lettuce was the most important lettuce variety in the Netherlands and Belgium in the 1980s and 1990s. Alternative lettuce varieties hardly existed. That's completely different nowadays. Products taking over are oak lettuce in red and green, the lollos, romaine and iceberg, and then there is the emergence of multicolour: three varieties grown from the same roots - or so it seems." 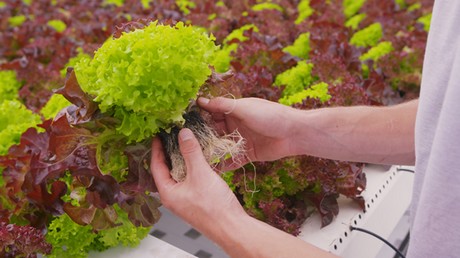 Food safety driving force
But it has not been the diversification of the market that has driven the growth of hydroponically grown lettuce. According to Kurt, food safety has become the driving force behind the development of hydroponic lettuce in both Europe and America. “However, food safety has a different meaning on each side of the ocean. In America, food safety is mainly about microbiology: the presence or absence of pathogens such as listeria, E. coli and salmonella. In Europe, food safety is mainly about plant protection products: the minimum presence or even the absence of residues of plant protection."

When thinking of it, it might come to your head that recalls due to outbreaks of listeria or E. coli seem to occur much more frequently in the US and Canada than in Europe. Kurt is not sure this has anything to do with the quality or safety of the produce. “In the US, there’s less attention for plant protection products residues, but much more for food safety and food poisoning. And it doesn’t end there: growers are also legally liable for the consequences - so it might not come as a surprise the focus is different. In Europe, growing without plant protection products and its residues and how these products affect the environment are a focus of governments, pressure groups and consumers.” 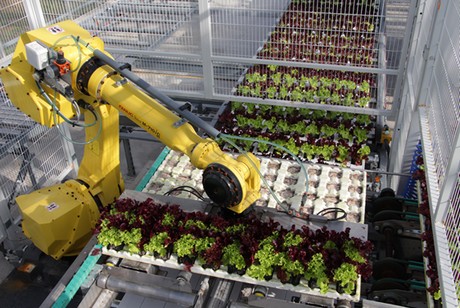 Either way, growing lettuce hydroponically offers added value for both the plant protection products as well as the pathological interpretation of food safety. Does this mean lettuce will be grown hydroponically and indoors in the future? Currently the majority of lettuce production still takes place outdoors. To be able to compete with that, the price of the installation is of course also important.

“When it comes to the cost price only, it is not yet possible for indoor growers to compete against open field growers," says Bram Vanthoor with Hortiplan, providing fully automated Mobile Gully Systems (MGS) for growers all over the world. “Growers regularly come to us with the plan to start growing lettuce hydroponically, aiming to compete with open field growers. If you get the same price for your lettuce, you will not be able to compete with them, and we tell this to these growers immediately. As a grower you have to ensure that the buyer pays a higher price for the certainty that he will receive a high-quality product year-round, grown under sustainable and safe conditions - whatever interpretation you give to that. ” 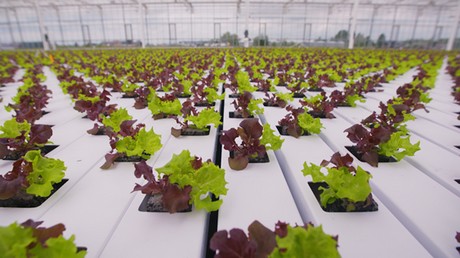 A good business plan is of vital importance to a successful hydroponic lettuce farm, Bram continues. “In addition to focus on the most important financial aspects, we therefore mainly look at how the grower wants to sell his product. Before making the investment, a grower must have certainty about the sales and price of the product. You need to have a good marketing operation and add a story to the product - by using the obvious benefits of growing lettuce hydroponically. And if you’re not capable of doing so, you should have a partner who can realize this. Following this approach we are proud to see that we have many successful clients all over the world. In the US our projects Hollandia Produce, Go Green Agriculture and North Shore Living Herbs accumulate together more than 25 acres showing the strengths of hydroponic production in the Mobile Gully System of Hortiplan”

"We see more and more retailers partnering up with growers to grow lettuce on mobile gutters in order to supply them with a safe product year-round for a constant price,” Bram continues.“We expect this trend to continue in the coming years. We are currently starting up the first projects invested in by retailers.”

Growing market
Putting it all together, Kurt believes the American market, including the US, Canada and also Mexico, currently offers the best growth opportunities for the hydroponic lettuce market. “The US market is currently not self-sufficient. A lot of lettuce is produced, but this is mainly done in the open field. Moreover,: there is a lot of production on the West Coast and hardly anything on the East Coast. The shelf life is limited and transport is expensive and difficult - taking product from the West Coast to the East Coast is much more expensive than transporting a truck from Spain to the Netherlands. Combined with a wealthy population that values their produce for being fresh, of high quality and grown locally, and the balance taps quickly in favor of lettuce grown hydroponically. ”