Caulipower to roll out frozen chicken tenders this fall

Caulipower, the California-based maker of frozen cauliflower crust pizzas, cauliflower tortillas and SweetPotaToasts, is rolling out frozen chicken tenders this fall. The company said its new product is baked, not fried.

Since launching in 2017, Caulipower has leveraged its vegetable focus into a powerhouse brand, showing up in the frozen section of retailers like Whole Foods, Walmart and Kroger. While the company has topped some of its cauliflower-crusted pizzas with items like turkey pepperoni and pepperoni, its new chicken tenders will be its first expansion to more meat-focused products.

The time may be ripe to venture in the segment. The company has stated that the US market for breaded chicken tenders, strips and nuggets is worth $1.15 billion. It's a crowded space, however, and just last week, Perdue also introduced its own vegetable-blended chicken nugget, although its version mixes vegetables directly with the poultry whereas Caulipower's uses cauliflower in the coating. 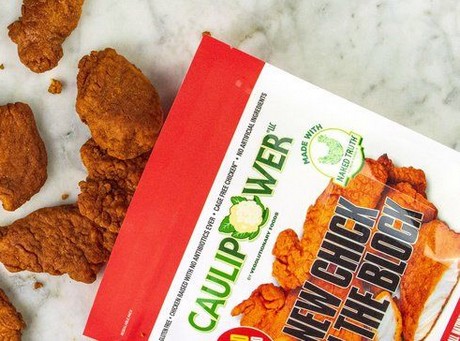 Caulipower may be leaning on the product's healthier qualities to differentiate it from the pack. The chicken tenders are baked, have no saturated fat and are relatively lower in calories. It's nutritional profile, combined with its chicken sourcing, could appeal to the growing numbers of health and environmentally conscious consumers.

Although fooddive.com claims that Caulipower's frozen chicken tenders represent a new direction for the company, it seems to know how to effectively market to busy consumers looking for easy and convenient shortcuts that are healthier and contain recognizable ingredients. If the new product is successful, the company could launch other coated products with chicken or pork, or maybe with plant-based proteins.