The collaboration is made possible with the launch of Autogrow’s new farm management platform, FarmRoadTM, which was announced by CEO Darryn Keiller at the Indoor AgTech Summit in New York on June 20.

“FarmRoadTM was conceived to fulfill two broad purposes. A platform for autonomous farming and secondly as a way of bringing together all disparate technologies that farmers use into one unified management tool,” explains Mr. Keiller.

“To be truly unified you need to be open and work collaboratively across the industry with buy-in from existing major players. It’s a concept we advocated two years ago when we came out with the first open API (Application Programming Interface) and I’m pleased to be in a position to say the dream is now tangible.”

He added, “We are ecstatic that Ridder has shown the foresight and faith in us, to support what we are doing and join us in showing the industry what is possible when true collaboration occurs.”

Both Autogrow and Ridder market automation solutions for Controlled Environment Agriculture (CEA) and both will be able to integrate with FarmRoadTM, the companies said.

“Ridder believes strongly in a connected future where systems and data are shared for the benefit of optimizing the plants growing conditions and more efficient and sustainable greenhouse operations.”

“As an industry partner, Ridder will make it possible for growers to connect their Ridder climate control and irrigation systems to the FarmRoadTM platform.” 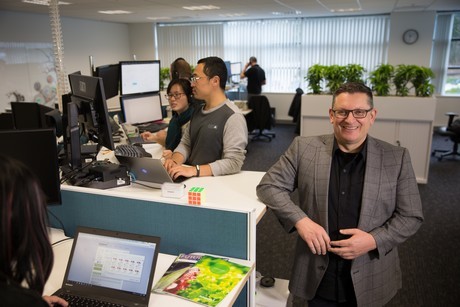 Alongside Ridder Group, Autogrow will also be collaborating with New York based Start-Up Native.

“Equally as important as an established player showing vision, is new entrants to the industry who are also bringing innovation. What Native are creating delivers a fundamental industry building block, which we will integrate with FarmRoadTM,” says Mr. Keiller.

The platform connects farms with local buyers, which the company says maximizes the value of harvests and helps both buyers and restaurants deliver on the promise and demand of locally sourced food.

“Our partnership with Autogrow will most benefit the growers and the farmers,” says Frank Pica, co-founder, Native. “FarmRoadTM users can provide Native with real-time data that verifies the quantity and quality of their harvests, and it will then return the true market value of the products. The platform then provides an outlet for growers to bring their products to premium markets within their region.”

“The next iterations of FarmRoadTM include flower and fruiting identification through Machine Vision and AI to provide pollination rates and flower to fruit conversion performance. We will be extending the 3rd party integration to include finance, labor management, food security and more,” says Mr. Keiller.