'Peaches & Nectarines: deliveries extended according to the season'

Spain apparently dominated the peaches and nectarines market, Italy and Greece complemented it. The deliveries extended according to the season. Demand also picked up, especially on Thursday; sales accelerated thanks to the friendly weather. Nevertheless, a total clearance did not always come about. So the traders had to lower their prices from time to time. Especially in Berlin, there were price reductions as a result of the expanded Greek inflow. 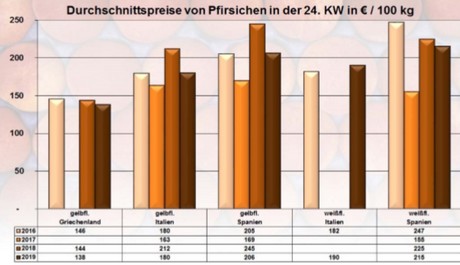 In Hamburg, only low-priced articles with discounts were issued. In Frankfurt, where many different ways of presentation were waiting for the customers, sales intensified on Thursday. The Italian products were offered there in 4 kg cartons as well as in 8 kg double layered ones.

Apples
Gradually, imports from the southern hemisphere came to the fore: the presence of Royal Gala from New Zealand, Chile, Argentina and Brazil grew. The sale of overseas supplies was normal.

Pears
South Africa prevailed here. However, pears were not the focus of attention; Stone fruit was more popular. This meant sales were sometimes going quite slow. As a result, traders had to correct their prices downwards.

Table grapes
The influxes of Italian Black Magic and Victoria certainly grew. The sales were actually pretty good; clearances occurred, despite the increased availability of the Italian batches.

Strawberries
Germany dominated very heavily, far ahead of the Netherlands and Greece. At first, the fruits suffered more from organoleptic weaknesses caused by rainfall in the growing areas.

Apricots
Spanish deliveries outweighed the French and Italian shipments. The quality of the wares was usually good. Due to the weather, demand intensified significantly.

Cherries
Spain and Turkey shaped the events. The supply expanded overall and the quality improved rapidly. Thus, larger and exclusively colored sizes, which could be handled quickly, were more frequently encountered.

Lemons
As a result of the heat, the accommodation options decreased. So the distributors lowered their prices to speed up sales. This did not always work.

Bananas
Demand was rather subdued. This was partly due to the holidays, partly to the high Some distributors had to reduce their prices slightly to avoid too large stocks.

Cauliflower
Local offers dominated. The summer weather slowed the interest. In parallel, however, availability of cauliflowers grew. Both these effects inevitably resulted in lower prices.

Lettuce
In the case of lettuce, Germany dominated the market, followed by Belgium. The demand could be met without any problem, despite limited supplies. Prices often remained at their previous level.

Cucumbers
The Netherlands, Germany and Belgium formed the basis of the range of cucumbers. Demand was not particularly strong; it could be met without effort.

Tomatoes
The offer consisted mainly of Dutch, Belgian and domestic batches. The availability grew and the demand could be easily met.

Sweet peppers
The Netherlands dominated before Turkey and Belgium. The interest was quite positive, so they recorded a steady turnover. The prices tended to go up, for the most part.

Asparagus
At Pentecost, the last big moment of this year's season was past. Some growers have already stopped marketing and finished the harvest. So the availability of domestic batches dropped off considerably.