Defect undetectable in the orchard but becomes evident upon storage

In the Koue Bokkeveld and surrounds the apple and pear harvests are all in, a very good crop on both, says De Kock Hamman, technical advisor, with good tonnages and size, but shelf life on apples is a concern this season.

Export estimates on certain cultivars (Golden Delicious, Granny Smith, Topred/Starking, Cripps Pink/Pink Lady, Braeburn, Jazz and Kanzi) have been adjusted downwards due to lower packouts, but still, this year's estimates are 4% above 2018 figures.

As bins are brought out from cold stores, it’s becoming evident that there is a higher incidence of bitter pit in apples in the Western Cape this year, more evident on large fruit. Lenticel breakdown, bruising and internal browning are also noticeable.

Because there are still large volumes in RA and CA stores, yet to be packed, the extent of postharvest defects on this year’s apple crop is unknown. 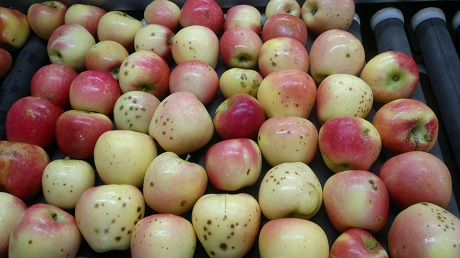 Large fruit have lower Ca concentration
The industry wasn’t anticipating these postharvest complications which could very well be yet another unexpected after-effect of the drought.

Bitter pit, in particular, is caused by calcium deficiency in the orchard. Calcium strengthens cell walls. Mineral analyses of fruit in the orchard can give a rough indication of whether a mineral imbalance is present in a particular block, but it’s no guarantee. 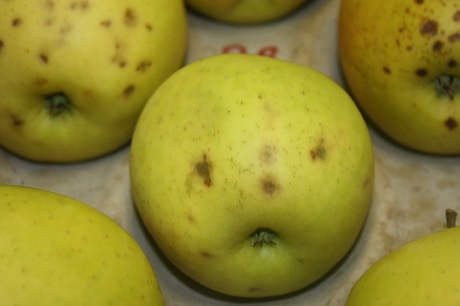 “There are a whole lot of factors that influence calcium absorption. The drought certainly played a role, but that’s only part of the problem,” explains Dr Elmi Lötze, horticulturalist of the University of Stellenbosch. “Production is down a fair bit due to fruit drop after the heat wave in October. The fruit remaining became very large and then the concentration of calcium is much diluted within such a large fruit. Also, identification of the problem isn’t always consistent. Lenticel breakdown is sometimes confused with bitter pit.”

De Kock also mentions the late spring when soil temperatures took a while to heat up, which could’ve stunted root hair growth, as well as rising pH levels of the southwestern Cape’s generally acidic soils. He says it feels like bitter pit comes around every four or five years. 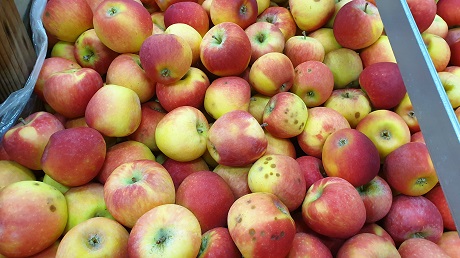 Storage costs can pile up before bitter pit is noticed
The problem for producers is that bitter pit doesn’t manifest itself in the orchard, but becomes clear after some weeks in storage. “The only thing a producer can do is to either market those fruit as soon as possible after harvest (but not as class 1). Those apples have to be identified and physically removed, necessitating a lot of extra labour, therefore some growers decide to leave the apples in storage and allow the defect to develop fully when it’s easier to spot and remove,” says Dr Lötze.

It is a cosmetic defect more than anything else, she adds, which doesn’t, in fact, render the fruit bitter, but no market accepts apples with bitter pit. Such fruit can be sent for juicing, but storage costs could have run up considerably before the defect is detected.

Fortunately, volumes are modestly elevated compared to last year, which gives producers more room to manoeuvre when packouts are lower.

After a warm month of May, substantial rain has fallen in the Western Cape with a light sprinkling of ‘flour’ already visible on mountain peaks.