Supplies of daikon out of California are relatively steady right now.

“It’s hit and miss in terms of volume of daikon but it’s steady. There’s no gapping,’ says Joseph Krumpelman of Valley Specialty Produce in Fresno, Ca. of the vegetable that’s similar to a winter radish.

That said, the vegetable, which is a staple in a variety of Asian cultures, did see a surge in popularity in late fall-early winter of 2018. “Last October-December, the market was really high. A lot of people planted it because at the end of last year the market was pretty good,” says Krumpelman. “Whenever a market is good, people plant more of it and that’s what we’re dealing with right now. There are big companies planting big fields of it and it’s driving the price down.” 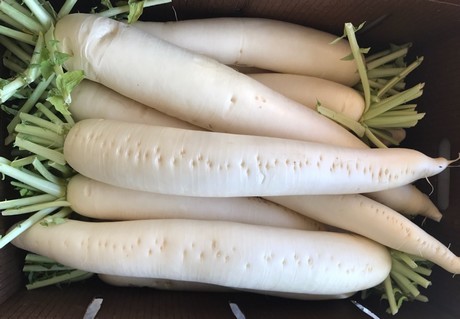 Continuous demand
Still, daikon is a year-round product. “It’s something my customers can use all the time,” Krumpelman says, though noting that demand for daikon is less than normal right now. Competing regions producing daikon are Fresno, Ca.

Yet Krumpelman adds that the pricing right now is similar to pricing around this time last year. “It generally stays around this price,” he says. “The price may fluctuate up and down by maybe $2. And generally when it’s flooded, it’ll get down to $7. But right now, it’s anywhere from $8-$12.”

Looking ahead, Krumpelman adds that he sees more of the same for daikon in terms of steady supplies bringing on continual steady pricing.