In the year 2018, strawberry sales represented a value of 152.5 million Euro. The tomato, which was previously the front runner, has a turnover of 148 million Euro last year.

Due to a disappointing tomato season, the strawberry took the lead from the tomato. The volume of tomatoes that was supplied in 2018 is at the same level as in 2017, but the average price decreased by 8 percent. 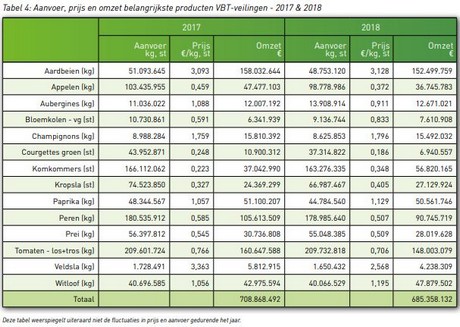 Greenhouse vegetables were met with clear competition in 2018 from the large volume of imported product from the south. The low price formation due to the Spanish overproduction and the low consumption lead to a difficult start for tomatoes and aubergines.

The pepper supply was lower for all four colours in 2018 compared to 2017. The pepper had average normal prices, but with large price swings. Lettuce was able to compensate for the limited supply with a higher average price (+24%).

Winter vegetables
In the first quarter of 2018 the market situation for winter vegetables was bad, but at the start of March the prices pulled up again when the weather became colder.

The warm month of April was followed by a warm May and June, which lead to supply peaks in asparagus with very low prices. Cauliflower and other cabbages also suffered from the heat and the drought. This, however, leads to lower productions, which benefited the price formation.

Chicory and leek had less supply in 2018 compared to 2017. The turnover of chicory rose by 11% and the leek turnover decreased 9% due to the low average price.

Top fruit
The price formation on the pear market was very up and down in the first quarter of 2018 due to an irregular supply and varied quality. Despite the wide supply of summer fruit the price formation of pears at the end of the 2017/2018 season was correct. In 2018 the supply was almost equal to 2017, but against an average price that was 13%.

Apples had a good price formation in the first half of 2018 due to scarcity in the market. The big European apple harvest put the price under heavy pressure in the first months of the season 2018/2019. In 2018 an average price almost a fifth lower than 2017 was noted.