Influx of jackfruit into US market

There is plenty of jackfruit available in the US right now as peak season continues in the Mexican growing regions. Over the past month, the market has become saturated with fruit leading to a wide range in prices and also quality. The peak of the season occurs in May and June so there is still several weeks to go until the market starts returning to normal.

"There is lots of jackfruit saturating the market right now," said Scott Miller of LA-based Tropic Trading Co. "We source them from Nayarit and are currently in the middle of peak season. There is all kinds of quality out there and prices have been all over the place, anywhere from between 28c per lb to 40c per lb."

Miller added that demand drops as summer progresses due to the presence of other fruit. "Demand usually drops in the peak summer months because there are so many other fruits available," he said. "People do eat jackfruit year-round but especially in California, there are a lot of stone fruit and other summer fruits that vie for consumers' attention."

LA market has special challenges
For suppliers, it's not just the large amounts of jackfruit that they have to deal with. According to Miller, there are truckloads of the fruit being brought in from Mexico and sold directly to stores, skirting the open market. These trucks typically sell jackfruit for much less than what buyers are seeing on the market.

"LA is a particularly bad market because of easy access from Mexico," he observed. "In summer the presence of the Barateros has been a constant problem. These are people that come in and undercut everybody else. Trucks full of jackfruit drive around town looking for buyers, and they can sell them for less than I can buy them, even though we work directly with growers and have our own packing house." 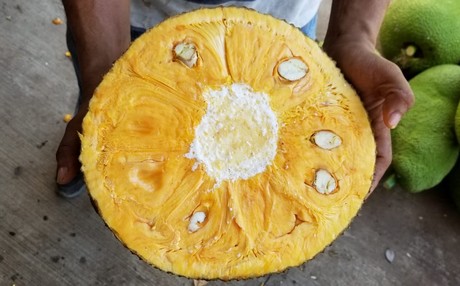 Miller: "This is what a good jackfruit looks like"

Long term solution is to build market
Additionally, the market for jackfruit is fairly limited, with almost all jackfruit in the United States consumed by Vietnamese consumers. This has resulted in a finite market with little opportunity to move more fruit even if prices were reduced. However, Miller said that he is aiming to grow the market and consequently bring jackfruit into more households.

"You can’t push on a string," he explained. "The long term solution is to grow the market by expanding its popularity to non-traditional consumers in the wider market. That process has begun and jackfruit is gaining some recognition outside of its traditional consumer base, but the process is slow. It is an excellent fruit that has an agreeable flavor profile to most consumers, but it has some challenges in marketing it. It is a large fruit that requires special preparation to eat it because of the sticky latex the fruit produces internally. It is also hampered both by the lack of consistent quality and the presence of players in the market that don’t know what they are doing, both at the grower and distribution level, and are not invested in the long-term success of the market, but just want to make a quick buck.

We have more years of experience than anyone in the market, and have invested a considerable amount of money in improving every aspect of our operation. Part of the solution is technological, proper cooling and postharvest treatment being the most important. But at the end of the day, we care about the long-term success of the market, both for ourselves and our growers, because if they can’t make a living the whole thing collapses. To prevent that we have to strive to produce the very best product for the consumer, not just because it is a good business strategy, but because it is the only way you can have pride in what you do, and that gives meaning to the money you earn." 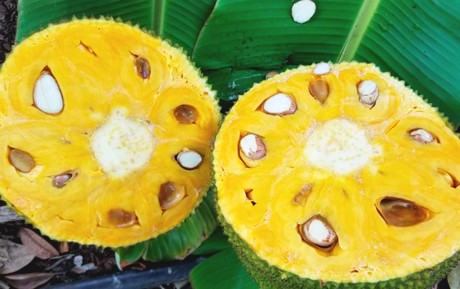 Distinguishing the quality
It has been mentioned that the quality of jackfruit is quite variable in the US market at the moment. Miller mentioned there are a couple of reasons for this. One is that some growers have established plantations on the edge of the optimal zones in Mexico, and therefore a lot of the fruit is of sub-par quality. Other reasons include fruit being picked too early as well as inconsistent storage and shipping conditions. He also noted that jackfruit is unique in that it is difficult to assess the quality before opening the fruit.

"It's very difficult to tell the quality of a jackfruit by simply looking at it," Miller said. "However, it can matter a great deal when you buy it because jackfruit is typically sold by weight. The inside of the fruit varies considerably by the amount of edible fruit there is, with a typical range of between 30 and 60 percent of the total weight. So potentially if a customer buys a poor quality fruit (even though it looks great on the outside), they are effectively paying double the price per pound if there is only a small amount of edible fruit."

"Tropic Trading Co. has customers that know our label and the quality of our fruit because we only buy from growers who we've worked with for many years, who are in the best growing area, and who through many years of experience know how to grow the fruit and when to cut at the proper level of maturity," he continued. "We have also worked with the growers to select the best varieties. For people that know jackfruit, they appreciate that quality."