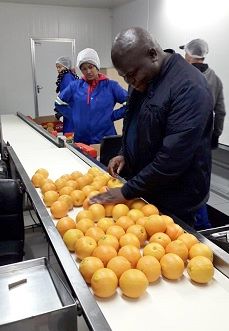 For the first season ever, Cape citrus growers can have their fruit destined for Japan inspected and loaded in their own provinces.

Starting last week, citrus for Japan was inspected at Cape Fruit Coolers close to Cape Town (right: Remember Dzombe, DAFF chief agricultural food and quarantine technician at the Cape Town office) and from next week, Eastern Cape citrus for the same market will be inspected and loaded at PE Cold Storage at the Coega Industrial Development Zone, Port Elizabeth.

Previously, citrus for Japan had to be transported from the Cape to KwaZulu-Natal, a journey of about 1,500km right across the country, where two facilities in Durban were approved to inspect and load all of the South African citrus for Japan.

“Being able to now do it in the Cape makes a big difference,” says Boet Mouton, director at Mouton Citrus in Citrusdal whose mid-season navels were among the first to be inspected for Japan at Cape Fruit Coolers last week. “It saves us a lot of time and strongly reduces our risk. All of the infrastructure is here to do it and it puts our market access to Japan on a much more sustainable footing.”

Mouton Citrus has over the years established firm business relationships with Japanese clients in retail, and they were quickly on board with this new development. “This could open the door for mandarins too, once Japan opens for our mandarins. At the moment we’re just sending navels but there’s definite interest in sending lemons as well.” 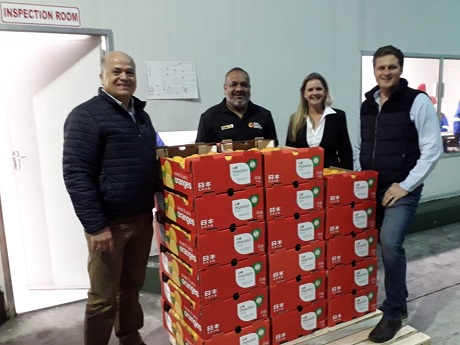 The possibility to inspect and load citrus for Japan in the Cape was primarily done to help growers to save in costs, says Mitchell Brooke, logistics manager at the Citrus Growers’ Association. A Japanese inspector visited both facilities in the Western and Eastern Cape in April.

The volumes sent to Japan aren’t huge, but at this stage every little bit diverted from Durban Harbour helps.

Shipments to South Korea, predominantly grapefruit, still have to go through Durban facilities.