The Zespri season is underway along with the company's “Let Your Taste Wander” consumer campaign for SunGold Kiwifruit. Zespri says once in the store, it is imperative that consumers can find the kiwifruit.

“Lack of visibility in the store is the biggest barrier to buying kiwi,” explains Sarah Deaton, Zespri’s shopper marketing manager. “A recent shopper study revealed that consumers love to eat kiwi, but if it isn’t presented in front or visible, it isn’t top of mind for many shoppers. We know in-store touchpoints have a notably higher impact in the fruit category compared to other foods. We’ve tailored our marketing efforts around eye-catching graphics, multiple display units, social, print and digital media and geo-targeted campaigns to reach consumers in the store.”

Zespri said it is providing retailers with displays designed with graphics that tie into the consumer campaign with the aim to build synergy and brand recognition. They are also providing a range of sizes including a standard display unit holding four cases of kiwifruit, and case stack sleeves holding five cases. The company cites research which indicates that doubling the size of a clamshell kiwifruit display nearly doubles kiwifruit dollar sales up to a 96 percent dollar increase. Packaged kiwifruit displays at the entry to a department such as a berry table increased sales 44 percent and a floor stack at the front of a department increased sales 56 percent. Additionally, secondary displays increase dollar sales 36 percent more than simply doubling the size of a single display. Another options is a display that attaches to the retail shelf with a spring clip. 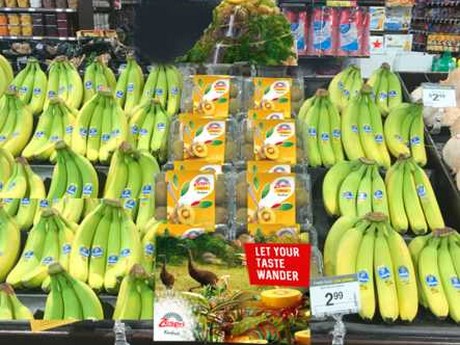 “Our target users are not traditional TV viewers,” states Deaton. “Our media plan is built to reach them in places they turn to for entertainment, information and aspiration including Hulu 15-second and six-second spots, national magazines, social media and influencers. We have four times the media investment this year to drive shoppers to stores to buy SunGold. We also encourage retailers to meet with our teams to build customized retail programs designed for their unique shopper.”

The consumer campaign is aimed to help shoppers explore outside of their typical fruit selections and break from their predictable grocery shopping routines. Zespri’s consumer agency created a CG rainforest populated with exotic animals, which is demonstrative of how shopping for this unique fruit can be an intriguing and rewarding experience through its “Let Your Taste Wander” campaign. The company said it also placed ads in a number of other media.