Following February’s announcement on exclusive ARRA production and marketing rights being awarded to the Jupiter Group by Grapa Varieties in India, Jupiter have today announced their chosen growing partner as Sahyadri Farms.

The exclusive production rights awarded to Sahyadri for ARRA varieties in India sees the collective ‘marginal farmers’ of the country benefiting from a global infrastructure from the fresh produce multinational.

After trialling the ARRA varieties in the region with great success, larger scale plans are coming to life. 100 acres of ARRA plants will be established by the end of 2019 and will scale by an additional 5000 acres by the end of 2023. Volume harvest is expected as early as 2020, for export to global markets. 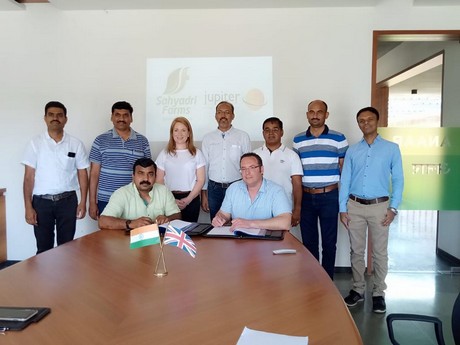 As the first table grape breeding program to enter India, Grapa, who commercialise the ARRA varieties on behalf of Agriculture Research & Development LLC share Jupiter’s enthusiasm for the move. CEO, Rafi Karniel relates: “Two years ago, my father Shachar Karniel, breeder of the ARRA varieties, and I visited India to study the market, the main players and the potential of the ARRA varieties. We were amazed by the operation of Sahyadri Farms and their new state of the art packing house. I don’t think Jupiter could have found a better partner in India for the ARRA varieties.”.

Continuing expansion
Recently ranked for the second consecutive time in The Sunday Times HSBC International Track 200, Jupiter continues to expand its position in the market. Achieving an average annual sales growth of 107.23% for the last two years, the company was placed 22nd in the highly respected list of the UK’s top performing private mid-market companies.

On home turf
The British family led business are at the heart of the London Produce Show exhibition this week at the five-star Grosvenor House in Mayfair’s Park Lane.

You can meet the Jupiter team at stand 212 of the trade exhibition on the 6th.