The Greek apricot season is coming up very shortly. The previous season wasn’t the greatest, so growers and exporters are hoping for some improvement this year. Next week the early variety Bora variety will kick off the season and it will be closed by the late French variety Fardao in the middle of September.

Greek exporter Nespar is excited to start the new apricot season in about a week. The last season wasn’t a great one, according to Konstantinos Maragkozis, the agronomist for Nespar: “The previous season was quite bad . All the varieties were around seven to ten days earlier because of the high temperatures. A lot new varieties came in the market without tested first from the market as well.” 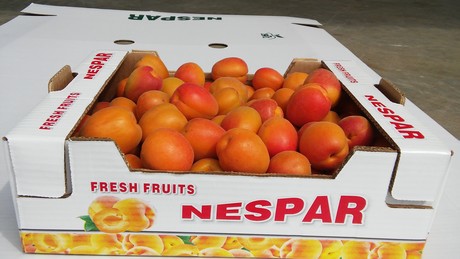 “Despite the disappointing season, there have been a lot of new apricot farms popping up in general. The producers in Europe like Greece, Italy, Spain and France all focused on the early varieties. Therefore, it will be a big challenge to deal with the abundant volumes of apricots on the European market, which is where we mostly export to. We do have some other clients in the Middle-East, that should soak up some volume.” Maragkozis explains.

The apricots from Greece are showing up slightly later than usual. Maragkozis says this is the result of the weather: The weather was quite cold in April and May, without a lot of sun being present. This is why all the varieties are a bit later than normal. In other regions in Greece we had some hailstorms, which will probably result in some quality issues. Nespar as a company will not have these issues though, we expect high quality apricots from mid-June until mid-September.”