A South African aquaponics grower has tweaked the techniques he has learned from Australia’s Dr Murray Hallam for African conditions and his design is being installed in an increasing number of African locations.

Colin Bremner’s Kleinskuur Aquaponics system in Donkerhoek, outside Pretoria, last year functioned for up to a week without electricity (when their transformer was hit by lightning), exhibiting minimal stress. 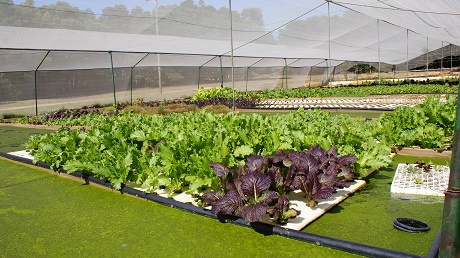 The water surface between the floating vegetables is completely covered by duckweed, which retards evaporation and is fed to the fish in the system

Kleinskuur Aquaponics produces greens, microgreens and herbs to packhouses that supply all of South Africa’s retailers and to a few restaurants, around 50,000 plants a month.

“This system has been running for three and a half years, during which we’ve never cleaned the system. It’s still the same water we started with. We just clean the outlet holes every three or four months,” Colin says.

In all respects he has tried to minimise reliance on electricity, using some quite interesting techniques along the way. The water temperature is maintained at 23°C despite winter cold that has dipped to -7°C and summer temperatures into the mid-thirties. In fact, he notes, at one of the Kleinskuur sites in west Africa, daytime temperatures can climb as high as 47°C but the water remains at 23°C. 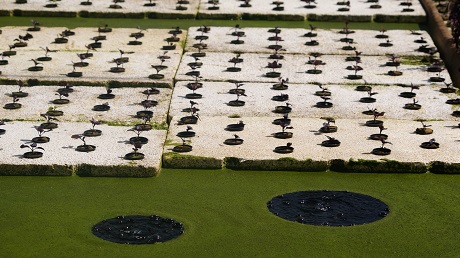 Geothermal piping, running along the outlines of the beds three metres underground, maintain the water temperature within this narrow band. The piping runs for a length of 160m in the commercial size of his aquaponic design.

Furthermore the system has only one water pump and one air pump. The surface is covered with duckweed, reducing evaporation and removing nitrates from the water, as well as being fed to the fish.

The fish come when he whistles, Colin says, as he scoops a handful of duckweed from the surface of the deepwater beds for them

The fish he uses – and the species that he recommends or provides along with his system design implemented in African projects – are the males of four tilapia species, all highly tolerant to pH and temperature fluctuations, low oxygen levels and high nitrite levels. 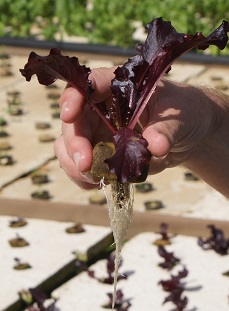 Seedlings are placed in ordinary sponges in which he cuts a slit (“our Pacman system”, he calls it), holding stems upright as the plant is lowered into its hole in the floating polystyrene plate.

The sponges (pictured right) are re-used many times, while plastic seed nets often tear when the plant is removed and besides, can cost up to R2 for one.

His own gravel bucket design
Regarding gravel beds, he solved the problem of anaerobic bacteria proliferating in areas that are not drained, which would usually necessitate a clean-out, with his own patent on a gravel bucket. These buckets house an individual plant (typically a fruiting plant), so that should the plant need to be removed, others are undisturbed.

“The gravel barrels, to which I hold the mould and design patent, is a manageable size, one person can carry it, and it doesn’t have to perfectly fit over a hole, it can be settled over a trench. Water runs in at the top and drains out, five cycles an hour. When the water drains out it takes with it the particles that are not eaten by earthworms. This drainage movement cools the gravel and the water down, from the approximately 28°C at which it leaves the fish to 23°C, the optimal temperature for roots.” 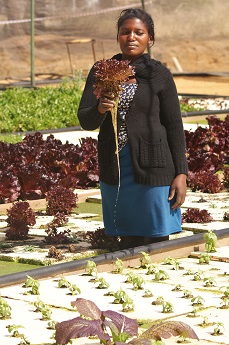 The gravel bucket system needs earthworms in the capillaries between the 20mm gravel pebbles, with other biota like nematodes and fungi also present, making it philosophically very different from the striving for sterile conditions in hydroponics.

“When you work with nature you have none of the problems they have in hydroponics,” opines Colin, who practised hydroponics for a few years in Port Elizabeth. “In hydroponic systems bacteria are removed with UV lights and ozone. We encourage other forms of wildlife, like dragonflies, lady bugs and other beneficial insects. Nature has been doing everything right.”

One drawback to the system is that under current legislation, such produce can’t, despite the complete absence of insecticides and other poisons that would of course be lethal to the fish, be marketed as organic because it does not grow in soil, Colin explains.

Expansion into Africa
His design is being built in Zimbabwe, Botswana and Namibia to provide fresh vegetables within the hospitality sector, while companies in remote areas in countries like Burkina Faso are also interested in its ability to produce in harsh environments.

Kleinskuur Aquaponics regularly offers training courses in his system of aquaponics. The next course is on 25 May 2019.