The fruit sector, and more directly the pear sector, are going through a tough price crisis. This is making more people think about the current price forming system of pears and this is bringing fruit growers together. The first meeting of the new Actiegroep Fruittelers (Fruit Growers Action Group)(07/05/2019) was a busy one in Tongeren, attended by over 150 fruit growers.

Call for unity
Fellow initiator Nico Rosmeulen was the first to speak and put the need for a group that unites the fruit growers and gives them a voice in the debate with all other actors in the sectors in words. He gave a clear call for unity across all professional organisations and cooperations. The Action Group aims to think about and set into motion solutions for the current price slump and the avoidance of similar crisis in the future, to be a significant partner in various debates and proposals of action to the government. A first introductory and positive talk was already held with Minister Van den Heuvel at a recent meeting at Pc-fruit. A number of representatives of the Action Group found a very willing to listen minister who took the time to listen to what the Action Group had to say and also went through the planned added measures with the fruit growers present.

Two concrete proposals were offered at the meeting in Tongeren: a harvest premium from the government to acutely get rid of the over supply and implementing an added price system with set prices for the coming season.

Price system
DLV made it clear that this extra price system is in addition to the existing auction price system. There is a clear need for more set prices throughout the chain. In a market with fresh productions a price system that rests on spot prices, like the auction price, may no longer be sufficient. The negotiating position of the producers is strengthened when bids can be made on prices in the future, a set price for the entire season, so that the grower can cover part of their production beforehand. A system like this can be set up based on transparent market information and the auction would be able to continue to fulfil its important role as a price index and trade price at that moment. The already available but also new market information has to be publsihed so that the fruit growers can gain a better insight into the supply and demand at all times, thoughtless growth can be avoided and targeted actions can be undertaken with more knowledge of business. Work can be done on a more modern market system in the fruit sector that rests on two pillars: the spot market with the current auction as a reference and the forward market that thinks ahead more and makes negotiation possible based on transparent market information.

The Action Group calls auctions and the rest of the trade to think along with them about various new price mechanisms and setting up a system of transparent market information. 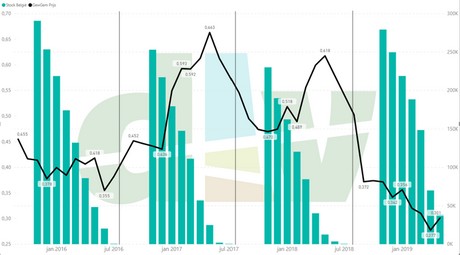 This figure shows the weighted average prices of pears in the last 4 season compared to the present stock. This oversupply leading to low prices could have been predicted beforehand and prevented based on more transparency and conversation.