The Banana Fair is organized by the Association of Banana Producers of Delfinópolis - ADELBA, Emater-MG and SEBRAE,. The program includes lectures, field day, round tables and exhibition of machines, equipment and supplies. At the fair, the Banana Collective Brand of the region will also be launched, which will be added to other collective brands of MG such as “Queijo da Canastra”, “Frutas do Jaíba” and “Café do Cerrado”. With this, Delfinópolis will occupy the singular position of being a municipality with two collective brands, since it is also included in the Queijo da Canastra. 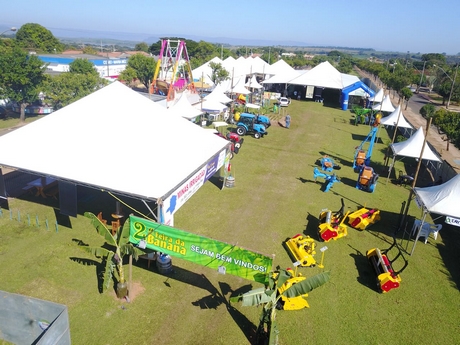 Delegations are expected from several banana producing regions of Brazil including the Ribeira Valley - SP, Northern Minas Gerais, Espírito Santo, Santa Catarina, Paraná, Rio Grande do Sul and Minas Gerais Triangle. Several research companies, including Embrapa, Epamig, IF Bahiano and Corbana (Corporacion Bananera Nacional - Costa Rica) will be present. Embrapa will also have a stand at the Fair with distribution of Company publications.

It will be an opportunity for producers to exchange experiences, listen to experts and learn about new equipment, processes and inputs. There will also be artistic programming, exhibitions of handicrafts and typical products, contests of the largest banana bunch and the best Canastra Cheese.

Delfinópolis is now the second largest banana producer in Minas Gerais, 150 farmers cultivate an area of 3,550 hectares. The estimated production in this year (2019) is 80,000 tons with a production value of approximately R$ 90,000,000.00. Approximately 1300 people work directly in the fields, not counting indirect jobs: office workers, workshops that provide services in the construction of sheds, repair of tractors and implements, buses and other vehicles that transport employees, resale of inputs (fertilizers, herbicides , fungicides), boxes, plastic bags, masons, locksmiths, suppliers of uniforms for employees, companies of assembly and maintenance of irrigation, suppliers of fuels.

The history of banana farming in Delfinópolis (MG) began in 1993 as an alternative to growing coffee that was undergoing very low prices. From the initiative of nine producers, Emater and the City Hall, approximately 20 hectares were planted at the end of that year. Some characteristics of the municipality favored the activity: climate, soil, availability of water for irrigation and proximity to consumer markets. Thus, from a modest beginning, the crop has become the main component of municipal agriculture, which is also great producer of soybeans (the largest in the south of Minas Gerais), corn, sugarcane and dairy and beef cattle.