Blueberry cultivation is relatively new worldwide. The global demand for the product continues to grow, mainly due to the healthy properties attributed to the fruit. The price for blueberries is therefore high and that is also the reason why many countries see potential in the crop. Eastern Europe, the Balkans and Peru in particular are strongly expanding their blueberry plantations. In fact, Peru has the ambition to become the largest producer of blueberries worldwide. In Spain, however, there are concerns about the fruit's increasing production. In April and May, this country had an oversupply of blueberries and prices at origin dropped drastically, even though prices in supermarkets remain high. 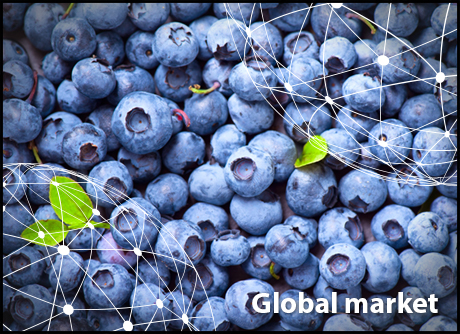 Peru: Production grows by more than 500%
In the first quarter of this year, the blueberry production in this country amounted to 18,000 tons. This is 571% more than in the same quarter last year. The country's fresh fruit sector as a whole also grew by 52% compared to the previous quarter. This development is in line with the country's ambition to become the world's largest exporter, taking that place from neighboring Chile. The majority of Peruvian exports are intended for the Chinese market.

The Netherlands: Low prices and many promotions with blueberries
At this time, Spain and Morocco are the country's main blueberry suppliers. A lot of Spanish products reach the market through Dutch packing stations. The Moroccan season is now coming to an end. Since it has been very hot in southern Europe, Dutch importers expect that quality issues might arise in the near future. The prices stand at a low level, but there have recently been some big promotions with blueberries at various retailers. According to Dutch importers, this led to some unexpected requests last week, given that there is normally more than enough supply on the market at this time. There is currently a lot of Spanish product on the market and prices are under pressure. From mid-June, a gap in the supply is expected, as a result of which, the demand and prices will rise, so it will be a good time for the northern European production to hit the shelves. For the time being, the Dutch blueberries are looking good. The last flowers are on the plants and the setting has gone well. Hearing the rumors of Polish berries having been hit by frost damage, Dutch fruit traders have reacted laconically, saying they have often heard that before the start of the season.

Belgium
The flowering of the blueberries is going well. Some growers have been troubled by frost, but the extent of the impact is still unclear. The first harvest of the open ground production is expected to kick off in the first week of July. The acreage devoted to blueberries is growing every year, together with the fruit's popularity. A lot is being invested in the development of new varieties, but the range is still relatively young at the moment. The biggest challenge for the future is finding good laborers.

Germany: Spain and Morocco dominate the supply
In Germany, most of the blueberry supply currently on the shelves comes from either Morocco or Spain. Morocco in particular has been gaining ground in the last few years. Moreover, some volumes from the Balkan countries (Serbia, Greece) and Poland are also arriving here and there. In Frankfurt, the price paid for Moroccan or Spanish blueberries has dropped to between € 0.80 and € 1.20 per 125 grams. In Munich, on the other hand, the supply has been limited, so prices have slightly increased.

Specialized traders still see potential in blueberries, especially for those they grow themselves, but there is also a great demand for off-season ones. This past winter was exceptionally good in terms of sales, according to a trader. The first blueberries from Germany are expected in mid-June. The so-called Dicke Blauen are grown in northern Germany, among other places, and are supplied commercially in organic quality.

France: Quiet market
According to a trader, it is now quiet at the blueberry market. “Our berries come currently mainly from Morocco and are of good quality. There is not much demand for the product. The prices are stable; the fruit is sold for around € 8 per kilo. ”In general, French traders import a lot of Spanish blueberries. Small volumes are also grown in France. The French season lasts from June to September.

Spain: Retail prices are 800% higher than those paid at origin
It has been a difficult year for the Spanish production. The prices paid for it dropped to record lows in the months of April and May due to oversupply. These prices didn't even cover the production costs. Such a situation had been feared for a long time. The blueberry production has grown too quickly in the Spanish province of Huelva. Also, prices are falling as a result of the growing production from Morocco and Portugal. The influx of Moroccan blueberries on the European market has been particularly noteworthy.

Growers have also organized protests because their products are purchased by supermarket buyers for € 2 per kilo, and those stores then sell it for € 19 per kilo. Many growers are planning to switch to other products, probably mainly strawberries. Other growers are being forced to put their orchards up for sale.

At this time, the later varieties are being harvested and the mid-season of the Star and Ventura is coming to an end. Exporters expect better results in June, at least until the Northern European countries are able to market their own production.

Poland: Damage due to frost
Frosts in April caused considerable damage to the blueberry harvest in Poland. Since the extent of the damage varies from region to region, it is difficult to estimate how severe it is. Estimates point to the volume falling by 10 to 40%. In any case, it is certain that the production will fall. The harvest is still expected to start before week 28. At the moment, blueberry prices are difficult to estimate, mostly because the production from many countries in the northern hemisphere is arriving at around the same time. Moreover, there are production areas in other Eastern European countries that are also coming on the market. Due to the cold and the wet weather, there is a chance that the blueberry pollination will have been affected.

Ukraine: Exports continue to grow
In line with other Eastern European countries, Ukraine is steadily expanding its soft fruit production. Blueberries are one of the most popular products for new plantations in the country. At the beginning of April, an export volume of between 4,500 and 5,000 tons was expected. The majority of exports go to Poland, Turkey, France and Belarus. Just like in Poland, part of the harvest has been damaged by the weather conditions.

Serbia: Exports to Russia
Like other countries in the Western Balkans, the Serbian government has invested heavily in blueberry cultivation. In Serbia, the blueberry harvest starts in June. There have only been some weather issues this past week. The volume is expected to grow by 30%, mainly because young blueberry plantations are becoming productive. Serbia mostly exports to its own region, to Western Europe, Turkey and Russia. The Middle East is also growing as an export market, especially the Gulf countries.

Italy: Technology and varieties should give the production a boost
In Italy, the blueberry harvest begins in late March in the south of the country and in early September ends in the northern regions. The demand for blueberries is going up every year. Compared to last year, it has increased by around 60% in southern Italy. The production is constantly growing thanks, among other aspects, to technological innovation and the introduction of new varieties.

The Berryway international berry producer network has launched a project to set up a professional production chain linking various Italian territories in order to supply fruit 12 months a year. Innovative blueberries are among the products.

In Calabria, the soilless cultivation of American blueberries (Vaccinium corymbosum L.) is being tested. There are three different varieties with early ripening. Currently, these blueberries are marketed only locally.

China: Blueberries instead of popcorn in the cinema
Blueberries are a popular product in China, not only because it is a very healthy product, but also because it is perceived as a tasty snack. This year, blueberries have been widely promoted as a healthy snack at the cinema, and this has been well received by Chinese consumers. China also imports blueberries when its own season has yet to begin. At the start of the year, these imports came from Peru and Chile.

In the provinces of Shandong, Guizhou and Liaoning, blueberries are produced in a large-scale, and in the provinces of Yunnan, Hebei and Sichuan the crops are also developing quickly. The demand for blueberries is high, but the supply is limited, pushing prices up. The production of Chinese blueberries will increase considerably at the end of this month, when most production areas will start their seasons. The campaign already started in March-April for the blueberries from Yunnan, Shandong and Dalian.

United States: Storm on the West Coast threatens blueberry harvest
Due to the weather conditions, there will be a gap in the supply of blueberries in the United States. The production in Florida has already come to an end. Georgia and Central California are starting on time, but have a shorter season. After June 20, there will therefore be a gap in the supply before the season kicks off in the Northwest. In Mexico, the blueberry season is also coming to an end.

Although the quality on both the West and East Coast is good, even better than last year's, the volumes on the East Coast are more limited. The demand in the United States remains good. "The demand for blueberries is always going to be there," says a Canadian trader. At the moment, the price paid for blueberries oscillates between $ 17.95 and $ 22.95 per half kilo. Prices have thus risen by 25% compared to last year.

Looking ahead, the season in New Jersey will start in mid-June. These blueberries are seen by some as the product with the best taste and texture, and a good season is expected. Oregon is also gaining ground as a blueberry producer with a high-quality production.

However, there are less favorable predictions for the West Coast. A number of storms are sweeping the region and could cause significant damage to the blueberry harvest.

Australia: Drastic difference between summer and winter harvests
The blueberry production is also increasing in Australia; however, there has been a sharp drop in blueberry exports. They have fallen by 38% in terms of volume and by 48% in terms of value. Nearly 1,000 tons were also imported.

The weather conditions have generally been favorable for blueberries, although there has been a drastic difference between the summer and winter harvests, as the latter were hit by frost.