“The cucumber market has major problems. Prices are far too low and sales aren’t going well at all. Last year, prices were very high, but they’re now being sold for 4 cent,” says Sven Jordens of Gemex from Genk, Belgium. “The tomatoes, both vine and cherry tomatoes, are too cheap as well. Cherries are at a price level around 1 euro per kilogram and vine tomatoes are around 30 cent. Bell peppers, on the other hand, were very expensive two weeks ago, although prices dropped to a more regular level this week.”

Now that temperatures are rising and there’s more sun, the trader expects the consumption of greenhouse vegetables to increase again somewhat. “Due to the lower temperatures, sales of leek are going well. The prices of leek are even above 1 euro, because no qualitatively good leeks are for sale anywhere except in Belgium. The south of Europe already has new leek, but these prices are also above 1 euro. However, the leek season is reaching its end. The current leek is from cold store, and when these run out, we’ll have to wait for new leeks.” 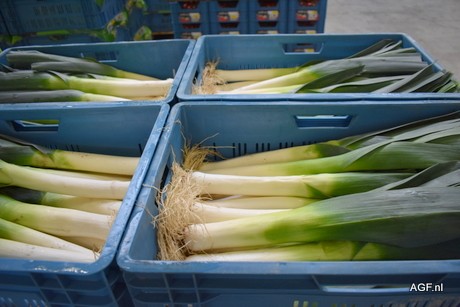 Fruit
“Regarding fruit, apples and pears are doing well. The trade is good at the moment, but it’s still dramatic for growers. Particularly Conference, Jonagold and Golden are doing well, because prices here are much cheaper than in Germany. We’re not affected by the bad quality of top fruit. It’s not hard for us to find good-quality apples and pears,” Sven says.

“We sold a lot of strawberries in the month of April. Prices were around 1 euro then. When prices started rising to 3 euro in the period before Mother’s Day, our German customers dropped out and switched to German strawberries. Prices are now dropping again somewhat, and we expect German demand will recover again,” Sven concludes.