US: Citrus greening disease found in Riverside for first time since 2017

Citrus greening, the disease that devastated citrus groves in other parts of the U.S., has been identified on the same property where an infected tree was found before. It was found in Riverside County for the first time since 2017.

Researchers on Monday, May 6th, confirmed the presence of huanglongbing, also known as HLB, on a kumquat tree in the yard of a Riverside house, according to Tracy Moehnke, a spokeswoman for the Citrus Pest & Disease Prevention Program. The program is funded by California citrus growers and administered by the California Department of Food and Agriculture. 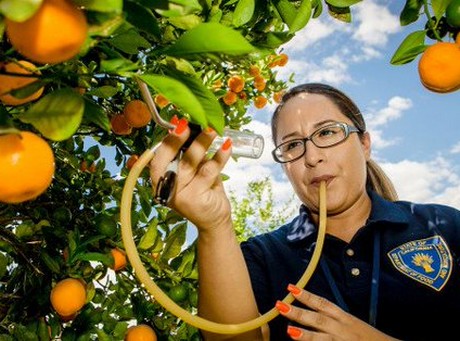 Meanwhile, 291 infected properties have been found in Los Angeles County, and 689 properties in Orange County, according to Moehnke.

The disease is transmitted tree-to-tree by the Asian citrus psyllid. The insect does not always carry the disease, but it is the only known vector. The psyllid was first detected in Southern California in 2008, and HLB was found in 2012 in Hacienda Heights.

Since then, Riverside officials say they’ve worked hard to stop the spread of the disease, which leaves citrus trees with mottled leaves and fruit that is misshapen and fails to ripen, remaining green. The fruit also tastes bitter. There is no known treatment for the disease and trees usually die within three to five years.

Pe.com explains how, in Florida, the disease infected at least 80 percent of the citrus trees within a decade, costing $2 billion in economic impact, and close to two-thirds of the citrus jobs were lost.