California Giant Berry Farms is hanging a blank canvas in their booth #7015 at the 2019 United Convention in Chicago to promote creativity and celebrate the colorful community of industry partners as the canvas is transformed into a Mural Wall. In celebration and commemoration of the last year United will be in Chicago, California Giant is inviting all attendees to fill in all the white space of the canvas creating a colorful picture of the produce industry.

The theme behind the California Giant Mural Wall is to “Leave Your Mark” on Chicago. All are invited to leave their signature, handprint, draw their favorite fresh produce items or creative drawings to officially leave their mark on the city as the annual Chicago-based convention soon transitions to a variety of new locations in the future.

“We want to embrace the excitement and creativity of the new components United announced for their annual convention this year by having our own creative spin to support the energy building for the future”, says Cindy Jewell, VP of Marketing. “The more we talked about it here at Cal Giant, the more it made sense to help United leave its ‘Mark’ on Chicago, so we created a literal and creative way for everyone to do that, while building a fun and interactive element in our booth,” she adds. 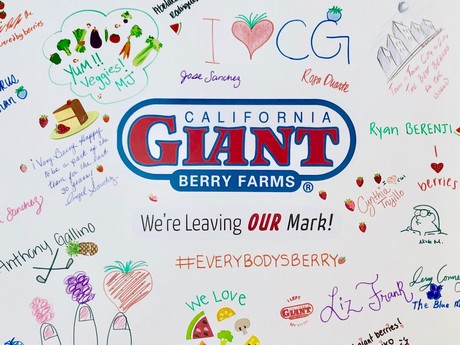 Staff commissioned a local graphic artist from Chicago to provide creative support, pens, stickers and other tools to help their produce industry friends decorate the space. The artist will draw a black and white background of the infamous Chicago Skyline on site as attendees transform the rest of the canvas into a colorful cornucopia of fresh produce, autographs and well wishes bidding farewell to the windy city in style. The artist will also assist anyone that might be a little reluctant to grab crayons or colored markers.

The 8-foot wall in the California Giant booth will be open to all and the staff invites each person at the convention to leave a message for United and/or Chicago. The company hopes all attendees and exhibitors will fill the entire space with messages using all the colors representing the wide array of fresh produce the buyers, sellers and industry partners represent. At the end of the convention, the canvas will be donated to the United Fresh Start Foundation. It is the hope that they will include the finished piece as a fundraiser at their annual Fresh Start Auction in January to support the many programs they have in place to provide children’s access to fresh produce.