Imports have begun of the Carolina reaper hot peppers into the US.

“The current supply of Carolina reapers is steady,” says Allen Demo, director of procurement and sourcing with Frieda’s Inc. in Los Alamitos, CA, who notes that the peppers are coming out of the Netherlands where they are greenhouse grown. “Compared to last year, supply is four weeks earlier. The crop began with a better start with good volume and it was also 10 days sooner.”

Along with the supplies out of the Netherlands, which are available until late November, Demo notes that competing non-certified product may be coming from Mexico. 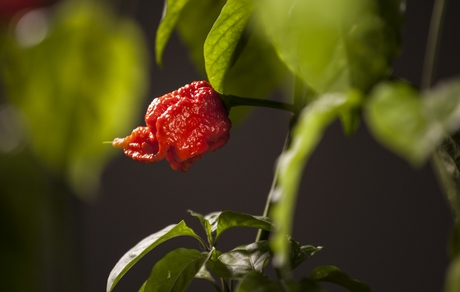 Commercial availability
Reapers, which are considered to be super hot chiles, have a reported 1,569,383-2,200,000 Scolville Heat Units (SHU) compared to other chiles such as the Scotch Bonnets which have an approximate 100,000-350,000 SHU. “They’re currently the hottest commercially grown pepper in the world and it’s a cross between the Ghost Pepper and the Red Habanero,” says Demo, noting that the pepper has bumpy skin with a signature “stinger” on the bottom.

The peppers, says Alex Berkley, sales manager at Frieda’s Inc., sell well in upscale or affluent markets as well as high volume stores. “While they are popular with foodies and pepper enthusiasts, it’s key to educate consumers by providing them with usage suggestions and recipes.” notes Berkley.