Leaf to Root: All the vegetables on the plate

Carrot greens as a delicacy? Or even a watermelon rind in your food? Unusual, but possible. "Leaf to Root" is starting a new kitchen trend, launched by Esther Kern. The food journalist and cooking website founder spends a lot of time in restaurants. She noticed that many top chefs use pieces of vegetables that normally end up as compost. In addition to this, the journalist has her own small garden in the canton of Zurich. She wondered, when harvesting Rüebli (an old, Swiss carrot variety): " Why not use the greens as well?"

In 2014, she launched the "Leaf to Root" campaign on her website waskochen.ch. It is the vegetable counterpart to English top chef Fergus Henderson's "Nose To Tail" campaign, where no part of the animal is considered too low to make into something delicious. 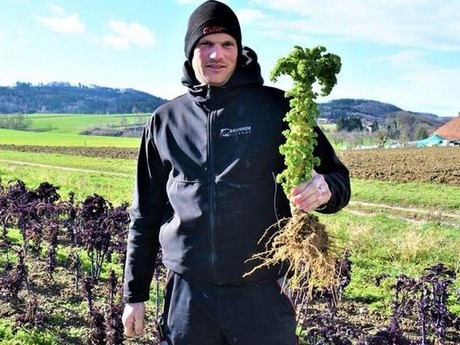 It's the same with "Leaf to Root". Esther Kern puts the spotlight on vegetables such as carrot herb, radish leaves, melon or pea skins. Whatever grows out of the earth; everything that is edible, should be served. Not just for reasons of sustainability, but because it really tastes good. You do not have to look far to discover new worlds of great taste in your own garden. "It's an exotic treasure chest right on our doorstep," says Esther Kern.

Innovation and tradition
Even in ancient times, people already used every part of their vegetables. Food historian Dominik Flammer's view is that the "leaf to root" movement is, on the one hand, an innovation and on the other really traditional. In any case, he is convinced it is a good development: "Esther Kern has created a basis for top gastronomy."

For cooks, the additional vegetable parts open up new possibilities. This is confirmed by chef Aurélien Mettler of the innovative restaurant LOKAL in the center of Biel. He does regard the "Leaf to Root" movement as a new wave, compared to, for example, Paul Bocuse's 'Nouvelle Cuisine'. But it is a trend nonetheless.

"Leaf to Root" has also found its way into his kitchen. Not consistently, but anytime it makes sense from a taste perspective. "The different parts of the vegetables have different cooking properties; each one requires different techniques and you get completely new results," says Mettler.

Whole vegetable pieces
If you do not have a garden, you can not just get vegetables that have everything from leaves to roots. You will search in vain for these products at the distributors. It is no different at the weekly market. Anyone who wants the whole plant, must pre-order.

A farmer who grows "Leaf to Root" vegetables is Stefan Brunner from Spins near Aarberg. He, too, wondered why so many edible pieces of vegetables were being discarded.

"When I met Esther Kern at a Pro Specie Rara cabbage dinner, new doors opened up to me." Today, the organic farmer supplies top gastronomers with "Leaf to Root" vegetables. Especially with spinach roots, kale shoots and pressed nutmeg (lamb's lettuce). "We let the stem grow extra long, because it has more bite." Properly prepared, this is a real experience," said Brunner.