"We have just received fresh Annabelle new potatoes from Spain, but these are less popular than Italian and Cypriot new potatoes," said Michael Cunningham of Kartoffel Kuhn Großmarkt GmbH, based in Mannheim.

"The Spanish Annabelle is slightly white-fleshed and tastes great, but the problem with Spanish goods is that customers are accustomed to red peeled goods from Cyprus and Siglinde from Italy, and visually the Spanish products have a hard time to beat the typical reddish coloration of the potatoes from Cyprus," he said. 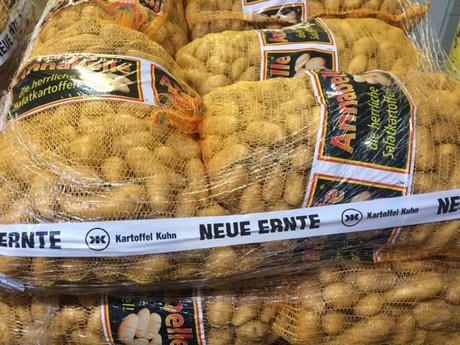 Nevertheless, sales have been good so far: "The people who were here at the booth and have tried the potatoes, were immediately won over. Of course you can not compare the popularity of imported early potatoes with the goods from the Palatinate."

The Spanish potatoes are currently priced at around €1.00 per kilo - and are therefore 30 to 40 cents cheaper than the competition. This is a more extreme price difference than is usual at Kuhn: "This year is just extraordinary for potatoes; ageing German goods are almost used up, and the weather in both Italy and Cyprus was terrible. Due to heavy rainfall the fields could not be worked, so the volumes shipped are not enough to cover the demand."

"In 10 to 14 days, the Palatinate new potatoes from our contractors should be ready to go. The rain of the last days has already stimulated the growth and as soon as it gets a little warmer, then it can really get started," said Cunningham.