More ways to network this year

More ways to connect. That’s ultimately the key theme behind some of the many changes being unveiled at this year’s United Fresh 2019 Convention & Expo.

The changes came about after the show runners recognized that participants and visitors wanted more—and better ways—to network at the annual trade show. “It’s a great show and we wanted to broaden the participation and enhance it as well,” says Nelia Alamo with the Renaissance Food Group in Rancho Cordova, Ca. “A big piece of the show is networking so these changes are more ways to network with people and bring the right people in.”

Women in the industry
One of the big changes made was to the show’s Women in Produce event. “This is one of my favorite events and it’s now going to be a breakfast general session this year,” says Alamo. In the past, the event had typically been a reception after the show. “But there was always competition with it because people were having dinners and things like that,” says Alamo. 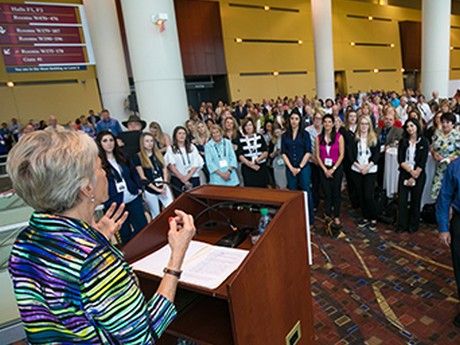 Changing the event to a morning session will allow for a better program but also more participation. “And I think we’re going to get broader participation. It will set the tone for the day. There are always remarkable stories at this session and I think making it a breakfast session sets the right mood for the day,” adds Alamo.

More social time
At the same time, on Tuesday evening, the show is launching a United Fresh Late Night Party at House of Blues to again, provide more opportunity to network. “Chicago is a big city so people go out and do their dinners and do different things,” says Alamo. “But this event will bring everyone back together for more interaction in a fun setting. You can do the show, do your dinner and then come back together for another networking opportunity.”

Changes to the show
Other key changes are being made on the show floor itself—including setting up a stage by the entrance to the show floor. “They’re also changing the Retail-Foodservice Celebration and having that at the end of Wednesday,” says Alamo. “By positioning it there, it should get broader participation and really focus on the recipients that we’re celebrating there. Because that’s a great program there—recognizing the retail produce managers and the foodservice operators that are so critical to our business.”

Also at the show, the learning centers are also going to get larger stages positioned near the show floor entrance and a food court will also be featured. “Typically trade shows might have a food station somewhere on the perimeter of the center,” says Alamo. “But this year they’ll have a food court on the show floor and make it more fun for participants with sponsored stations. It’ll be another interactive and fun area and is also another networking opportunity.”